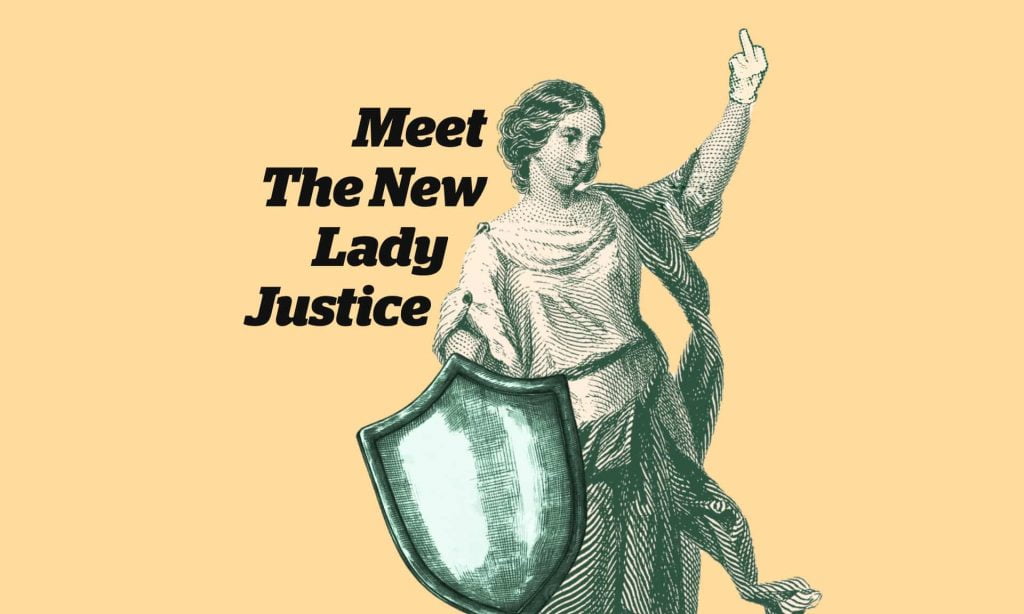 The new lady justice. Photo by the UN-aligned design team.

As long as international justice is left in the hands of nation states at the UN nothing will ever improve because self-interest will always win the day. This needs to change. Meet the new lady justice!

Have you ever wondered why representations of Lady Justice depict her in a blindfold? The accepted explanation is that the blindfold symbolises impartiality. Lady Justice is supposed to be oblivious to power, status, wealth or any other privilege. She also sports scales, which represent fairness through the weighing up of the facts, and a sword, which represents swift and thorough retribution. Although the scales date back to her earliest manifestations as the Egyptian goddess Maat, the blindfold probably originated with Hans Gieng’s 1543 Gerechtigkeitsbrunnen (Fountain of Justice) in the Old City of Bern. Despite the accepted wisdom, however, one cannot help comparing the blindfold to that of “blind” Fortune, whose largess is purely random. How else can there be so much injustice in the world?

Sadly, from the earliest times, justice has been understood in purely dualistic terms. The idea of “an eye for an eye and a tooth for a tooth” dates back to the earliest codes of law. However, no matter how many guilty eyes one may put on one side of the scales, they will never account for one innocent one on the other. As long as innocent people, or even animals for that matter, are treated unfairly, justice will always be elusive. At its best, this justice is just a deterrent or a reckoning for those who espouse evil, at its worst, it is merely a hope for a retribution that may never come to pass.

The same goes for a lot of things which time buries, but does not erase… a simple act of unkindness, for instance. So, what sort of justice can Ukrainians hope for? A deliberately blind justice with rusty scales and a vindictive sword, or a dynamic justice that aims to stop the atrocities from happening in the first place? I ask the question in the backdrop of mass murder… genocide, even. I ask it as international criminal investigators sift through carcasses, while not far behind their backs, fresh ones are being made. Even if Vladimir Putin and some of his cronies do end up before an international criminal court before they are too old to even care, would that bring back the dead, the lost limbs, the peace of mind and the broken homes? Would belated justice cleanse the surviving children from the memory of the living hell they had been forced to witness? No, of course not. So bureaucrats should not call their travesty of Justice, justice. It is no more than a bandage on a wound that will not heal and a little revenge in the hope of deterring further blows in the future.

Justice is inexorably linked to human nature. If I drown in rough waters, that is not injustice, but if I am pushed, it is. However, it is also injustice if you let me drown when it is in your power to save me. Ukraine is drowning and we are letting it drown. Worse still, we are making the situation for Ukraine worse by our flimsy institutions (the United Nations prime amongst them), our gormless policies of appeasement and our unwillingness to stop financing Putin’s war machine by paying him 1 billion euros or so a day for his bloody oil and gas. The situation is tragic, but as long as international justice is left in the hands of nation states it will never improve because self-interest will always win the day.

Why nationstates cannot be trusted with international justice?

Just look at the scandalous April 7 UN vote on whether or not to evict the Russian Federation from the Human Rights Council. Out of 193 nations, only 93 voted to expel Russia despite gross human rights violations, including genocide. 58 countries abstained, 18 were absent, while 24 actually voted against.

To put this in perspective, it is worth taking a closer look at Africa and Asia. Out of 54 African countries, only 10 voted in favour of the motion, of which three are Island States (Comoros, Mauritius and Seychelles) and therefore less likely to be influenced by mainland politics. This is nothing short of an insult to the most sacred of human rights: the right to life.

The situation in Asia is even more alarming. Out of 48 Asian countries, only 6 voted in favour, and of those, three are Island States (Philippines, Timor-Leste and Japan), one is Turkey, which is partly in Europe, and one is Myanmar, whose ambassador to the UN does not represent the current regime in his country, as he stayed on after the coup despite threats to his life. If the vote had required the approval of half of all United Nations members, it would have failed by eight votes. I would hardly call this an overwhelming endorsement for human rights.

This leaves us with two options. The first is to hit our head against the wall, until we are too braindead to care; the second is to admit that the existing world order is terminally flawed and incapable of meeting the needs of humanity as a whole and that therefore we should be doing something about it. This may sound like a very tall order as humanity is what it is and it cannot be changed overnight. Well, it does not have to. The important thing is that it is on the right track. At first sight, the situation may appear as a chicken and egg dilemma: people need sound institutions in order to flourish in a civilised manner, but at the same time these institutions cannot create themselves, nor can they be created by thoughtless or narrow-minded people. However, the reality need not be that complicated because there are already enough people around the world with an understanding of human rights and the will to defend them.

The problem is that the world’s foremost organisation, the United Nations, has had the few clear and worthy principles it stood for hijacked by its nation states.

I am not only talking about permanent Security Council members, like the Russian Federation, but the organisation as a whole that would allow the desecration of any human right as long as enough member states were in favour of the violation. I have discussed the flaws of the United Nations at length in my book Unravelling the United Nations, and the weaknesses of international courts in my article on the ICJ and the ICC; I have also proposed some solutions, so I will not revisit these here. I will therefore move on to getting on that right track.

As mentioned above, a fair amount of people do understand human rights and they are willing to do what it takes to promote and implement them. These people understand that values are more important than power.

In fact, even a United Nations with no member states at all would also be better. UN-aligned, with its members from all over the world, is such a united nations. Our members have made a stand as they are not prepared to be complicit in the betrayal of human rights and justice. Ethical principles may not make an organisation powerful, but they make it worthwhile. Power can come later, and of course it will have to for the organisation to have the ability to effectively safeguard peace and justice, but unless integrity comes first, power will always be a liability.

This takes us back to Lady Justice, with her blindfold, toga, scales and sword. As a symbol, I believe she has failed to represent true justice adequately: she needs an overhaul… First of all, her blindfold needs to come off. She has used it to turn a blind eye to self-interest, like political expediency and Russian oil. She needs to see clearly and in doing so she would not need her cumbersome scales. Next, she needs to be naked and transparent. Purity and courage has nothing to hide and courage is crucial for justice because she does not hide behind borders and treaties. Finally, her sword needs to be dropped and replaced by a shield, for protection is more important than vengeance. The sword can be handed to the Furies: let them worry about punishment; it only serves as a distraction for justice. Of course, seeing as the shield is defensive, it also involves armies, such as the ones we should be giving to Ukraine to stop the slaughter, but protection not aggression is the key. This leaves her with a free hand: what about a middle finger to the likes of Putin?