How to achieve a robust legal system? Solutions towards comprehensive global justice 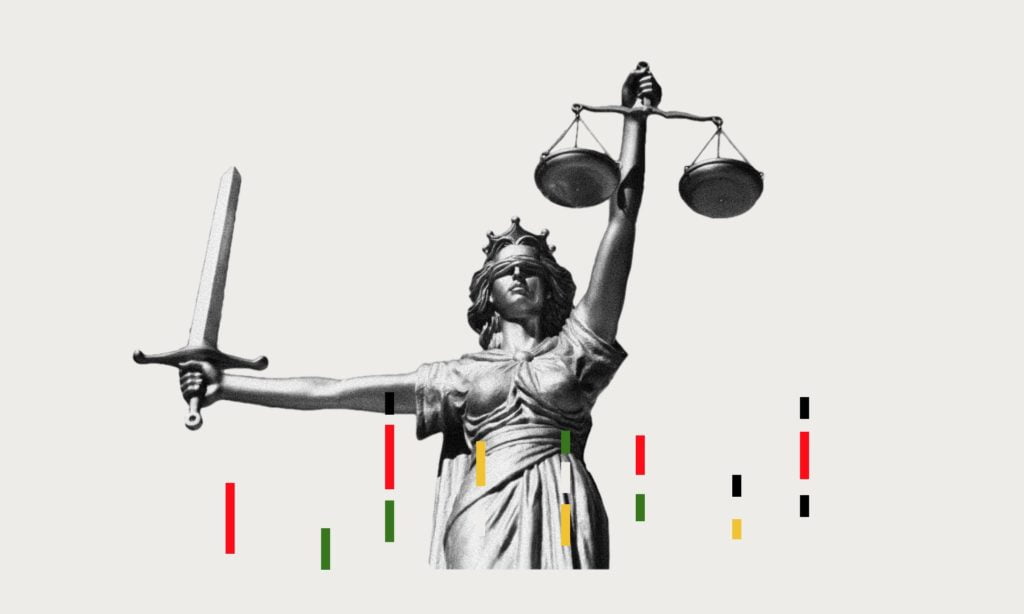 War should not be glorified with epithets like ‘just’ or ‘holy’; nor should it be legitimised with conventions aiming at damage limitation. Photo by the UN-aligned design team.

In an article in last month’s issue of The Gordian, I highlighted some of the weaknesses of the International Court of Justice (ICJ) and the International Criminal Court (ICC). Whilst these bodies are merely a part of a wider international legal system that is also governed by various treaties, conventions and accords, they are pivotal in as much as their focus is on safeguarding human life and world peace. My conclusion was that these two institutions were flawed, compromised and generally ineffective. In this issue, therefore, I intend to offer some concrete ideas for a robust legal system.

When, in the 6th century B.C.E., the Scythian philosopher Anacharsis was told by Solon that he was compiling a list of laws, the Scythian laughed, claiming that laws were like spiderwebs: they catch the weak and helpless, but let the powerful rip through. Not much has changed since then. An 18th century English nursery rhyme puts it nicely:

International law is not that different. Countries with the greater firepower often terrorise the weaker and their crimes go unpunished, while within a country, those with power often abuse it to the detriment of its law-abiding citizens. The problem is that in order for international law to be effective it needs four pillars to sustain it.

Let us look at these pillars more closely…

We may think that at least in principle, international law covers the most essential points relating to the guaranteeing of world peace and protection against crimes against humanity, but think again. Until war is made illegal, ruthless people will always find loopholes in order to invade, kill and pillage. Article 6 of the UN-aligned manifesto addresses this point clearly:

War is an unacceptable way of resolving differences, or crimes committed by one country against another.

War should not be glorified with epithets like ‘just’ or ‘holy’; nor should it be legitimised with conventions aiming at damage limitation. Differences between nations need to be arbitrated in accordance with international law, just as personal or municipal conflict is now subject to national laws. Crimes committed by one nation against another should therefore be dealt with by international law enforcement officers or police. Combatants on the side of the aggressor will be criminals. Countries can no longer be allowed to use the term ‘soldier’ or ‘patriot’ to justify the deployment of people to commit crimes…”

Of course, this is easier said than done. Technically, war is illegal. The 1928 Kellogg–Briand Pact (The General Treaty for Renunciation of War as an Instrument of National Policy) is still in effect. It was signed by most nations including the United States, Germany and France, who were amongst the first.  Signatories pledged to resolve “disputes or conflicts of whatever nature or of whatever origin they may be, which may arise among them” without resorting to warfare. Despite this, however, it is business as usual when it comes to buying and selling arms and using them for political or territorial gains. If laws are not taken seriously, they are just pieces of paper that simply serve to blot away the drive towards any meaningful safeguards.

Just look at Israel’s recent bombardments of Gaza and how many civilians have lost their lives, including scores of innocent children. What right does an adult have to disregard a child’s life to the point where it is considered acceptable collateral damage? Any life, for that matter, is sacred, especially innocent ones. Unlike Palestine, which is not a full member of the United Nations (UN), Israel is, and it is operating an apartheid system that continues to steal land and homes form Palestinians, and yet it seems that all the UN and the international courts can do is wag a finger at its rogue member. The Security Council cannot even do that, as the recent spate of aborted meetings shows.

Indeed, Israel is but one of many violent UN Member States. So, clearly, laws alone are insufficient. Nevertheless, they are a necessary first step in the process. Where are the laws criminalising ecocide, homophobia and animal abuse, for instance? Laws need to be consistent and comprehensive in their protection of human and environmental rights. Sadly, religion has a lot to answer for when it comes to these omissions, but that is another story.

So, we need laws and laws that are taken seriously. The only way to show that they are worth more than the paper they are written on is to ensure the structures are in place for these laws to function effectively. Last week I discussed how the ICC has been wasting millions of dollars since 2002 with very little to show for it. I also explained how the ICJ operates with the enemy within its walls and does so to such an extent that, as Anacharsis would say, it allows greater beasts to dart through its web.

The law must be flexible, but there can be no loopholes. So here are some prerequisites for decent legal system:

This brings us to our last pillar, enforcement, which is the one that is often so shaky that it allows the whole structure to collapse. Indeed, when power rests with the corrupt and self-serving, there is only so much that can be achieved. This is all the more difficult when dealing with nation States.  How to end the occupation of Palestine, for instance, when the US and Israel hold most of the cards? Nevertheless, despite this law of the jungle reality, there is still much more that can be done. If the UN was not compromised, there would be a range of things it could do, as the body representing world order, to punish aggression.

First and foremost, it could expel nations that break international law. True, that would leave the halls of the UN fairly desolate, but the UN should be about quality, not quantity. If principles were adhered to, it would be more likely that nations would either be willing to take them seriously, or ignore them all together. At least the battle lines would be drawn and citizens would be able to see once and for all where their elected or unelected governments stand.

Second, pressure could be exerted by other means such as sanctions, boycotts, embargos and travel restrictions. This issue was discussed in a previous article and as explained there, though such measures are far from being a panacea, they can, nonetheless help.

Finally, a “United Nations” made up primarily of individuals as well as respectful member states, as UN-aligned proposes, would have more leverage. This “United Nations” would not be the one with the enemies within its wall; rather it would become the enemy within the walls of rogue States. As such it could exert a different type of pressure such as civil disobedience and strikes.

Let us start with the worst scenario. If Justice did stand up to violence and hypocrisy, this would, as mentioned above, draw up the battle lines. The problem with that is that the dark side would be in a better position to win the fight if it came to a Star-Wars-Like confrontation between good and evil. The “do-gooders” would be subjugated or wiped out and greed would at last triumph on the earth. This scenario assumes the forces of aggression would be prepared to put aside their differences to crush the threat posed by integrity and justice. It would also be conditional to winning the fight with the forces for justice within respective borders. A tall order and one not particularly backed by history; well not in the long run at least: eventually evil destroys itself.

The best scenario is more likely. International law will be cleansed from its double standards and self-defeating structures.  It will become a beacon for justice world peace, which will inspire a desire and commitment to living in peace and harmony. This vision is well within the reach of humanity. Perhaps what emboldens aggression even more than power, money and arms is the despondency of people of good will; doubting that we can have a better justice. Hence, we have two choices before us: give up or buckle up. In other words, do you want to be part of the problem, or part of the solution?

Unlike most organisations, UN-aligned is, primarily, its members. We are the New United Nations and though just a drop in the ocean, for now, we will carry on growing until we will become a force to be reckoned with! The more of us there are, the more chance we have of achieving our aims. Help us by promoting membership to you friends or to people you think have similar values. If every member added another, membership would snowball and we would be unstoppable! We also need active members: people who roll up their sleeves and contribute to the work of the organisation. Some already have, for instance, by writing articles for The Gordian, or offering to help with proofreading. No matter what you can do, we want you. Write to us with your talents and we’ll make it work.
Become a free member →
Human Rights, UN in Focus

Off with the head! Getting Rid of Phoney Justice

Executing a human being and punishments like solitary confinement are as coldblooded and premeditated as murder and torture can get. They are not in self-defence, because the danger has passed. It is not justice, because a person can always outweigh their deeds, and they can change, given the chance. The theme of this series is still justice and in this issue, we are looking at it from different angles, including those phoney ones imposed on the guilty with little or no respect for their welfare and human right. This issue offers the usual mix of politics, interviews and culture by UN-aligneders across the world, including Ruby Goldenberg, Carla Pietrobattista, Katharina Wüstnienhaus, Victoria Davila, Partho Chatterjee and Maya Bearyman, Cristina Mihailescu, Omar Alansari-Kreger, Atika Harba and Sonia Roopnarain. The editors are Adrian Liberto and Ariana Yekrangi.