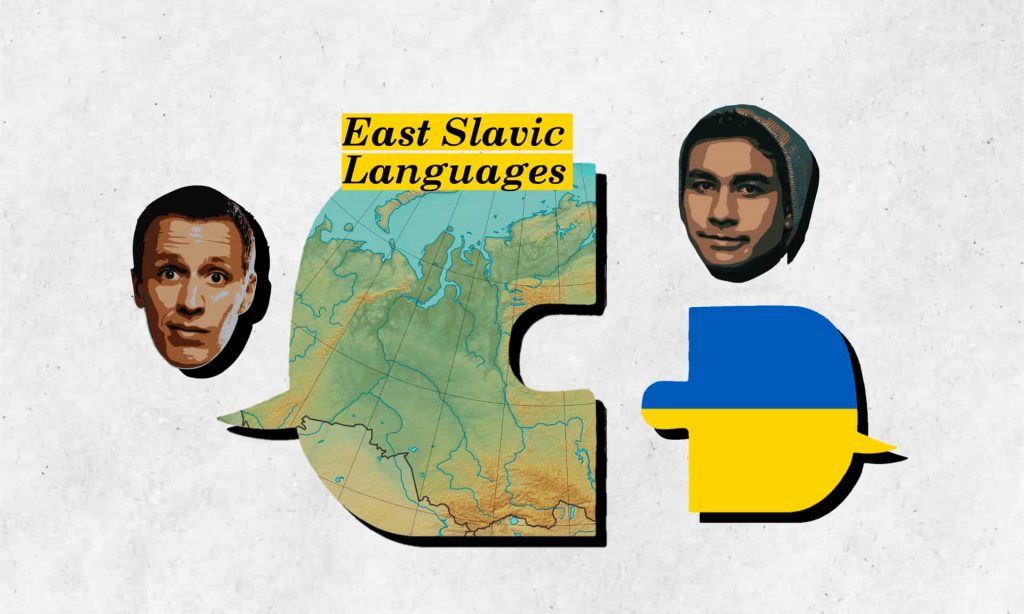 As the Ukrainian invasion enters its third month, Aryan Yekrangi writes about the difference between Russian and Ukrainian language, which are often mistaken as the same.

Russian and Ukrainian are often mistaken as the same language, especially by people who have no prior exposure to Slavic languages. This confusion is justified considering that both Russian and Ukrainian use the Cyrillic alphabet, and they both belong to the language family of East Slavic (Slavonic languages). In fact, the only other East Slavic language is Belarusian. Many sources estimate Old East Slavic to have diverged into these three sub-languages as early as the fifth century. This left a large window of time for these languages to develop independently. Historical and geographical aspects have also influenced the development of these languages. This article compares Russian and Ukrainian from a number of linguistic aspects.

Russian is a Slavic language, which falls under the group of Indo-European languages. More specifically, it’s an East Slavic language. Other than Russia, there are only three countries with Russian as their official language, namely Belarus, Kazakhstan, and Kyrgyzstan. However, the language is spoken in over fifteen countries due to the effect of Soviet Russia. Russian is also widely used as a lingua franca throughout the Caucasus, Central Asia, and in some Baltic states. A lingua franca is a common language chosen by speakers of different languages for purposes such as trade and general communication. Thus, while the language has a respectable 150 million native speakers, the total number of Russian speakers is estimated to be as high as 260 million worldwide.

Ukrainian is another East Slavic language, however it only has about 45 million speakers, consisting mainly of native Ukrainian speakers. Outside of Ukraine, this language is only spoken by small communities in countries such as Poland, Kazakhstan, and Moldova. It is generally accepted that Ukrainian is closer to Belarusian, however Russian is the second closest language to Ukrainian.

Russian and Ukrainian share many similarities, however they also differ in a number of ways. Here we will compare these two languages in regard to their orthography and spelling, phonology, vocabulary, grammar, and comprehensibility.

Both Russian and Ukrainian utilize variations of the Cyrillic alphabet. While Russian and Ukrainian alphabets both contain 33 letters, not all letters are shared across the languages. The four letters Ёё, ъ, ы, and Ээ are used in Russian, but not in Ukrainian. In contrast, the Ukrainian alphabet contains the four letters Ґґ, Єє, Іі, and Її, which do not exist in Russian. Furthermore, words are often spelled differently. The difference in spelling can be small, such as in холодец (Russian: xolodets, meaning “aspic”) and холодець (Ukrainian: xolodetsi), but it can also be very large, such as in стул (Russian: stul, meaning “chair”) and стілець (Ukrainian: stiletsi). Of course, this difference is only in regard to words that share the same root, and words with different roots are spelled completely differently.

Russian and Ukrainian share about sixty percent lexical similarity. This difference in vocabulary is close to the similarity between French and Portuguese. This number is about eighty percent for Ukrainian and Belarusian. As a point of reference, Spanish and Italian are estimated to also share seventy percent lexical similarity. Additionally, the Ukrainian language has been highly influenced by the Polish, and thus contains a large number of borrowed words. The word пані (pani meaning “lady, Mrs.”) comes from the Polish word pani, and the word ґудзик (gudzyk meaning “button”) comes from the word Polish word guzik.

Russian and Ukrainian are almost identical in regard to their grammar. Both languages have three grammatical genders, i.e. masculine, feminine, and neuter. They are also identical in regard to verbal conjugations, with the exception of small spelling differences. However, Russian and Ukrainian differ in the number of grammatical cases (i.e. changes in noun form). Russian uses six grammatical cases while Ukrainian uses seven. The difference in the number of cases is related to the vocative case which exists in Ukrainian, but not in Russian. The vocative case is used in situations where a person or object is addressed directly. In the example below, note the difference between Максим (Russian: Maksim) and Максиме (Ukrainian: Maksime).

The two languages also differ in their use of the copula, i.e. the verb “to be”. Ukrainian commonly maintains a cupola while Russian does not. For example, the sentence это незаконно (eto nezakonno, literally “this illegal”) is expressed as це є незаконно (tse ye nezakonno, literally “this is illegal”) in Ukrainian. However, this is not always true and Ukrainians sometimes drop the copula, especially in spoken language.

A large portion of the Ukrainian population speaks Russian fluently. This is especially true for the Eastern population in Ukraine, where some people even prefer using Russian to Ukrainian on a day to day basis. Furthermore, while some Ukrainians may not speak Russian, they have a large amount of exposure to Russian media, which facilitates their understanding of the Russian language. A Russian speaker, on the other hand, would have a difficult time understanding Ukrainian without prior exposure. A Russian speaker may only be able to understand 30-50 percent of spoken or written Ukrainian, if they have no prior training in Ukrainian. However, learning Ukrainian is extremely easy for many Russian speakers and may only take a few months.

In general, we see that the languages differ only slightly in aspects such as orthography and grammar, but quite significantly in aspects such as vocabulary and phonology. Overall, these languages are different to the extent that it would be impossible for their speakers to fully communicate with one another without prior exposure or training to the other language.