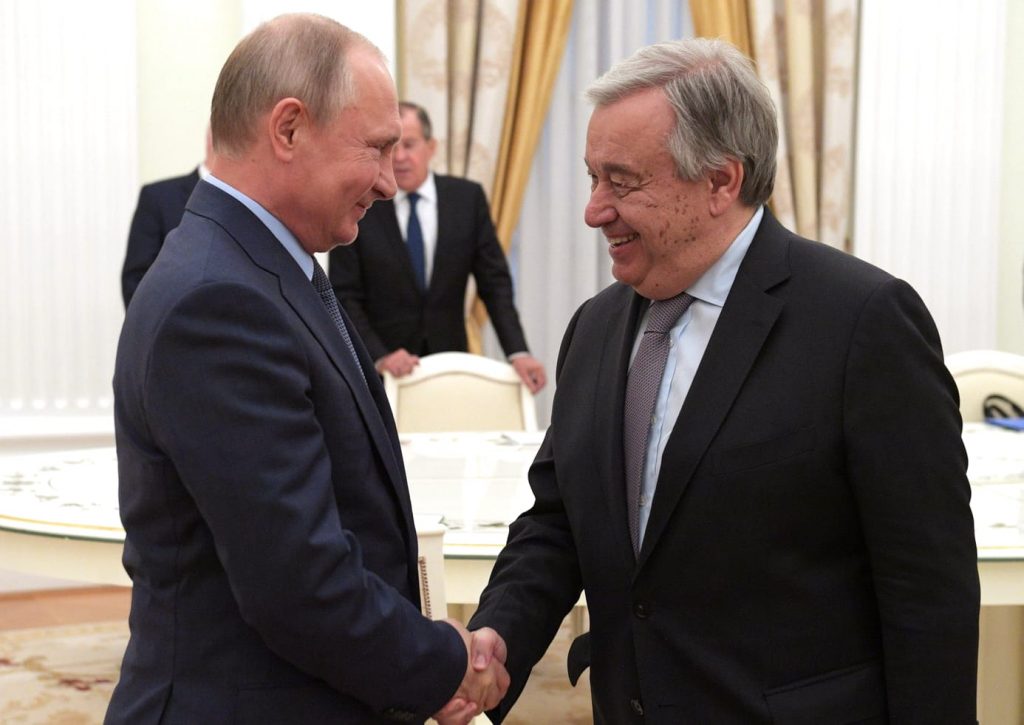 Would you entrust a child you love to the care of a school or nursery if you knew that not only many of its teachers, but the school board itself, consisted of child abusers, rapists and murderers?

Of course not! And yet that is exactly what we are doing when we entrust world peace and human rights to the United Nations. The enemy is not only within the walls of the United Nations, in most cases, the enemy constitutes an integral part of the organisation itself. By ‘integral’ I am particularly referring to the five permanent members (P5) of the UN Security Council. In fact, most of the world problems since WWII stem directly or indirectly from one or more of these five permanent members. The Russian Federation’s invasion of Ukraine is just one of the many instances of a crisis that has been caused or exacerbated by one of these powers. I have discussed the flaws of the UN at length in my recent book: Unravelling the United Nations, so I will not dwell on its lack of structural integrity or its monumental failures here. Instead, I wish to focus on the current crisis.

The situation leading up to and following the invasion of Ukraine by Putin will no doubt provide yet another case study of the UN’s ineffectual nature, but even though the tragedy is still unfolding, it has already added a new dimension to the mix of UN fiascos; perhaps its most terminal yet.

What makes this situation unique?

A combination of factors makes the UN’s position regarding this crisis even more blatantly absurd than previous ones. They are:

Putin’s invasion of Ukraine transcends the plane that allows the UN its usual wishy-washy excuses of equivalency. The situation here is as clear cut as Sauron versus Frodo, or the Empire versus the rebels in Star Wars. Moreover, Putin’s anachronistic nostalgia of Soviet era imperialism adds a glaring contrast to the liberated democracies of 21st century Europe, Ukraine included.

Putin’s war is a one-sided, malicious and completely unjustified attack on a sovereign state and in some ways, it is even more brazen than Hitler’s initial moves against parts of Czechoslovakia and Poland. The inability of the League of Nations, the United Nations’ predecessor, in the face of Nazi Germany was one of the reasons for its demise. It could no longer justify its existence in the face of such failure. Now, despite the UN’s string of disasters, this might just prove to be the one that will be quite impossible to sweep under the carpet, leaving the organisation exposed to an uncertain future.

He was equally ruffled a few days earlier when at a press conference he was asked about the possibility of sending Peacekeepers to Ukraine; he was forced to reply that it could not happen because Russia would veto such a proposal.

Will kicking Russia out of the Security Council fix the United Nations?

As the name implies, the business of the Security Council is security; in other words, peace. How can we have peace if one of the principal guardians of it is one of the most actively bloodthirsty men alive? (See related article on Putin.) It is like trying to win a football match while one of your best players is only intent on scoring own-goals. Of course, it would not happen in a football match, even though it is only a game, because the player would soon be cast out. Peace, however, is not a game, and yet innocent people are dying because the UN is powerless to kick Russia and its supporters out of the team. If China attacked Taiwan, once again, the UN would have to wag its finger and watch helplessly. Even more tragic is the fact that, if Putin, who appears to have lost all sense of decency, decided to go for the nuclear option, the UN would be just as powerless to stop him.

The presence of peacekeepers on Ukrainian soil would have certainly been a deterrent, pitting Putin against the world, while providing some protection, but the UN’s failure here is more than just logistics. It is a case of high treason. I am not referring to the Secretary General or the thousands of UN operatives, the majority of whom abhor this war of aggression. I am referring to the organisation itself embodied in its Charter. As an organisation, the United Nations is compromised as it has never been before and the reason for this is because it has put form before substance; its makeup before its principles.

The UN should represent the best of humanity. Its members should be committed to peace, human rights and environmental protection. Instead, it is a club whose members can regularly flout its tenets without impunity. Moreover, by default, every person on the planet is expected to endorse this club of nations because we are assumed to be a part of it. As the opening of the Charter claims:

Thankfully, members of UN-aligned have formally disassociated themselves from that club. We have our own “club”, one that is founded on inviolable principles, rather than a bureaucracy that is at the mercy of powerful states. “We the peoples” applies to each individual member in UN-aligned, irrespective of one’s country. It is our principles that bind us together, not a derelict bureaucracy. When it comes to decency, there is no compromise.

The king is dead. Long live… Er, sorry, we haven’t decided yet!

Former US president Trump was keen on undermining the UN. This vendetta did not spring (or wholly spring) from a just indignation at the organisation’s inherent weakness or from the fact that his boasting had drawn laughter from delegates during his 2018 address. Unlike his pal Putin, who is happy to plough ahead with his plans without giving the UN a second thought, Trump hates criticism, or being held accountable, even nominally, to anyone else.

He also detested the fact that American money was going to social and cultural causes. This highlights the fact that, world peace apart, the UN does accomplish a great deal when it comes to crying foul or supporting worthy causes. Its demise would leave a gaping hole in many areas of human development. That is why it is so important to lay the foundations of a new world order from now. UN-aligned has already done this and its vision for the future includes a federal order that enshrines choice and respect.

Reform is not an option. The 2005 Ezulwini Consensus, for instance, requesting a fairer African representation is still a pipe dream. The UN is in no mood to change and never has been. Here is another example taken from Unravelling the United Nations relating to the veto:

“Some countries, led by France, have tried to limit this power when the Council is deliberating on extremely serious situations, like those involving genocide. The cynical response, in September 2015, of the Russian Ambassador to the UN, Vitali Churkin, who had also blocked a resolution condemning the Srebrenica Massacre on its 20th anniversary a few months earlier, was unequivocal: “We see it as a somewhat populist proposal. If France wants to limit its own veto, they are welcome.””

The best way forward is to create something new and show the UN up for what it is. The organs that work well could continue to function under a different umbrella, while the Leviathan that is the United Nations with all its steadfast anachronisms and severe limits could be left to collapse under its own weight.

As American futurist Buckminster Fuller pointed out: “You never change things by fighting the existing reality. To change something, build a new model that makes the existing model obsolete.” Now is the time for action and you can start now by becoming a free member.

I would like to conclude with a message to Putin: You have failed. Despite the extraordinary level of your evil, it is no longer the focus. What stands out is the bravery of the Ukrainian people. You are making martyrs and heroes and whatever the military outcome, you have already lost. As the 30 brave soldiers said to the Russian ship before they were blown out of existence: “Go gfuck yourself Russian ship!”, I say the same to you: “Go fuck yourself Putin!”