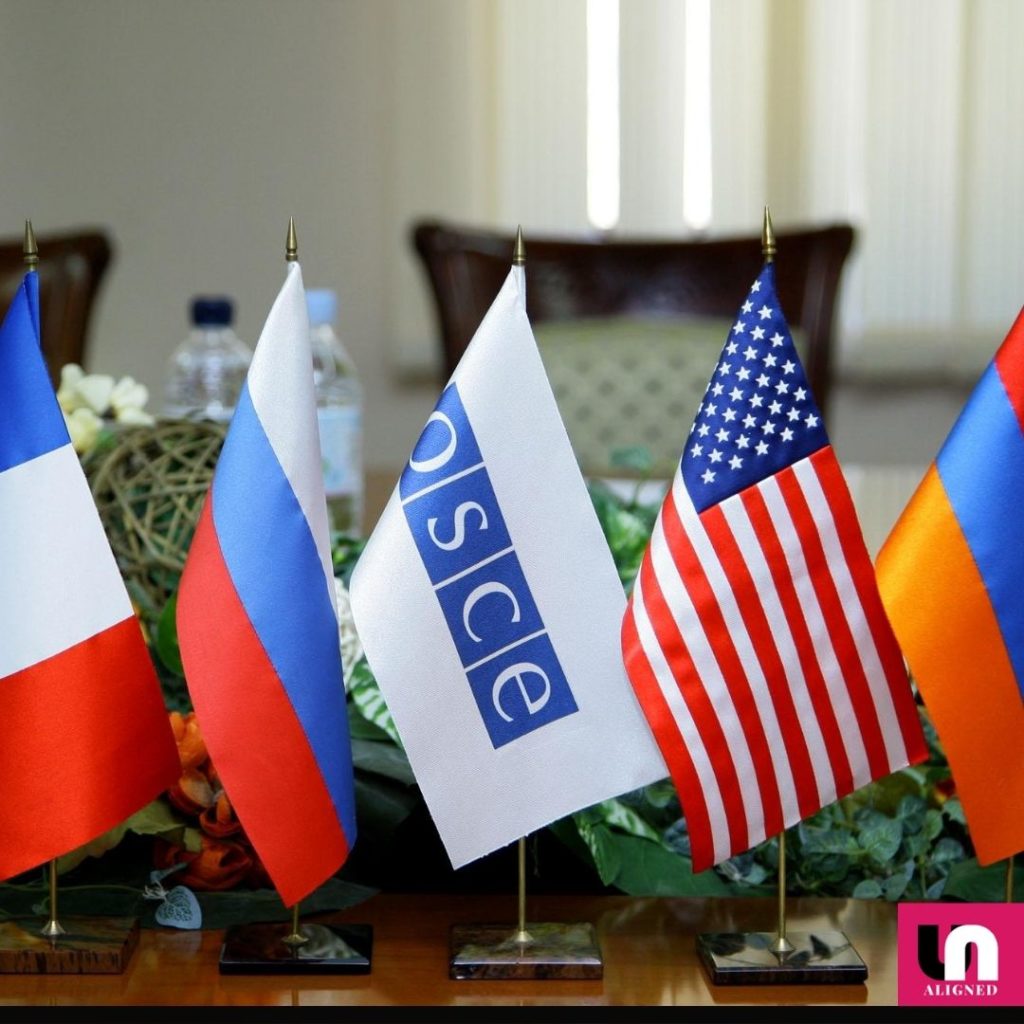 The OSCE Minsk Group and some of its members’ flags

In 1992, two years before the war between the neighbouring Armenia and Azerbaijan ended, the Conference on Security and Cooperation in Europe (OSCE), met in Helsinki and decided to chair negotiations towards a peaceful political settlement for the crisis.

The body, also known as the Minsk group, is led and co-chaired by the US, Russia and France with Belarus, Germany, Italy, Portugal, The Netherlands, Sweden, Finland, Turkey, Armenia and Azerbaijan as participating member states.

However, in July 2020, the Southern Caucasus region once again became the scene of bitter military as well as political clashes: tensions between Armenia and Azerbaijan reached boiling point as both sides blamed the other for ceasefire violations. Seven soldiers and a civilian were killed on the Azeri side as well as four Armenian border guards on the opposite side of the border.

Just within the past ten years, artillery shelling and skirmishes between the Azerbaijani and Armenian military have resulted in hundreds of deaths.

Where is Nagorno-Karabakh and why has it become a centre of battleground between Armenia and Azerbaijan?

Nagorno-Karabakh, also known by ethnic Armenians as Artsakh, is located at the eastern edge of the Armenian Highlands and formally enclaved in Azeri territory. In the aftermath of the first world war, the Transcaucasian Federation was divided into Georgia, Armenia and Azerbaijan, all three of which were integrated into the USSR.

As a part of his “divide and rule” strategy to ensure Armenians would cooperate with the Soviet Union, Stalin created an autonomous region for ethnic Armenians, called Nagorno Karabakh. In the early parts of the 20th century when the Soviet’s rule over the block loosened, Nagorno Karabakh region’s parliament voted to join Armenia and thus became a breakaway state.

Chaos followed after the decision which resulted in the deaths of thousands of Armenian and Azeri men and women. Today Nagorno Karabakh is formally recognised as a part of Azerbaijan even though the region is largely sustained and supported by Armenia.

1. Erbfeindschaft: The legacy of the genocide must become irrelevant

A key to the resolution of this conflict lies in addressing historical components that go into this century-long issue. The wounds of the Armenian Genocide in 1915, a Turkification attempt in which 1.5 million Armenians were mass murdered in Turkey and adjoining regions by the Ottoman government, are still fresh. Today in Armenia, there lies a general sense of mistrust that the Azeri government cannot and must not be trusted, less so when it comes to Nagorno-Karabakh. Both governments must allow time for these historical tragedies to heal.

The word “erbfeindschaft” is meaningless, hatred does not lie in our DNA. As the case for Japan and China has shown, nations who have shared a past of violence, war, and atrocities can successfully forge strong friendships. Until the “Ancient enemies” theory between Azeris and Armenians will become irrelevant, governments on both sides have a duty to stop and oppose disgusting propaganda portrayed by political entrepreneurs whose fueling and stirring up of the crisis is detrimental to the peace process.

2. The OSCE Minsk Group is not here to solve anything: Russia and Turkey are more concerned about their self interests, while The US is not interested at all.

Geo political ambitions of Russia and Turkey are main obstacles to the peace process of Nagorno-Karabakh region. The Russian military’s support in the form of a defence agreement between the Armenian government and the Russian Federation, only exacerbates concerns of the state’s neutrality.

In fact, deteriorating relations between Russia and Turkey over the war in Syria may be a reason why Moscow has an interest in keeping the conflict alive in order to maintain its influence in the southern Caucasus region. On the other hand, Turkey’s unwavering support for Azerbaijan’s cause is partly because of its own nationalistic agenda.

Across the ocean, the lack of senior level response to the latest violence is proof that Washington does not consider the Caucasus as a priority. During his four years in office, Trump and his administration have not even bothered issuing a policy on the South Caucasus region.

Fundamental changes in membership as well as leadership are a must for the OSCE to have any meaningful impact. Azerbaijanis have long distrusted the OSCE’s Minsk group. The replacement of France in favour of the European Union could be a solution to this problem: the EU would represent all of Europe and has more experience mediating similar conflicts in the Balkans, for example.

Commitment to demilitarisation and honouring cease-fire agreements, respect for the democratic will in Nagorno-Karabakh and confidence-building measures among the parties to the conflict are key in building a stronger Caucasia.

The situation in Nagorno-Karabakh is unlikely to change with the current inexperienced peace-resoluters. Not only structurally flawed, but also completely mismatched, the defective Minsk group will continue to fail in its endeavor in stopping this ancient battle.