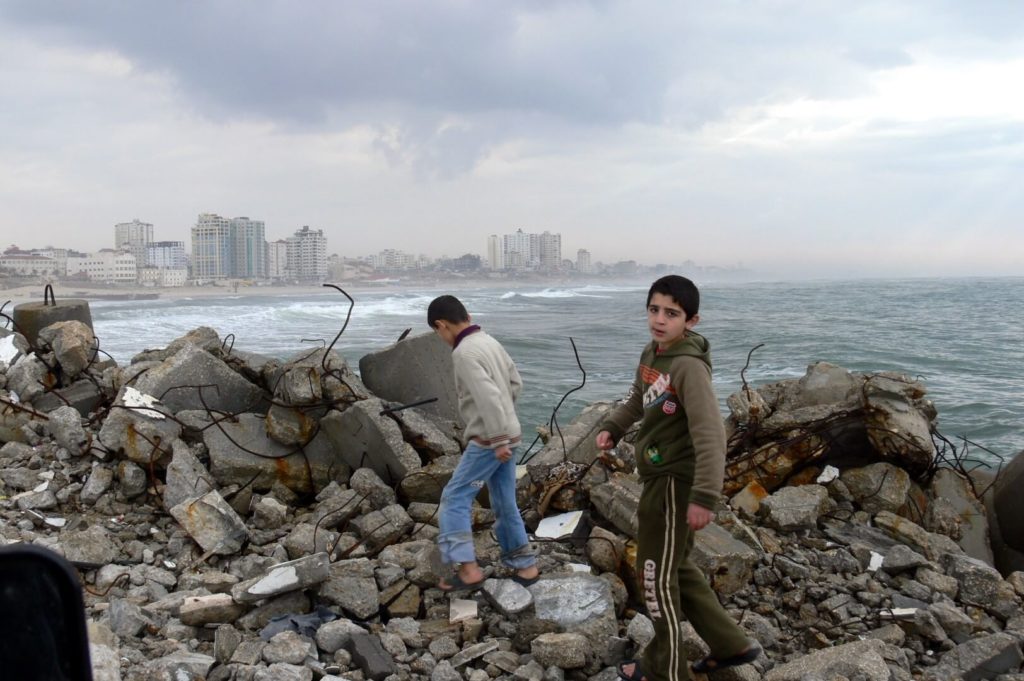 The Gaza Strip, bordered by Israel, Egypt and the Mediterranean Sea, is the home to more than two million people. Photo by Marcin Monko / CC BY 2.0

Your past is in front of your eyes, it’s 2014, 2012 and 2008 all over again. You cannot escape it, visual reminders are scattered all over the city. Being bombed back to the middle ages seems to be a recurring theme in Gaza.

The history concerning the Israel and Palestine conflict is complicated. What is not at all complicated, however, is whether or not it is admissible to airstrike civilian areas, news buildings, health facilities or Covid labs. Whether or not it is acceptable to take away life should not be a controversial issue, one would hope.

When a man who lives with his wife, parents and young children, as it is so common in one of the densest cities on the planet, is bombed, the aftermath is not just a pile of rubble on the weary streets of Gaza, it also wipes out three generations of life. Puff! Gone with just one airstrike.

Matters are, of course, not that straightforward. Israel’s recent escalation is pay-back for the rockets fired by Hamas; political allies of Israel have raved about it all month. Only within the last week, the US has confirmed half a dozen times Israel’s apparent right to self-defence. This is, unfortunately, the position of a lot of politicians in the west: Israel has a right to defend itself, but Palestinians do not. All the Israel defence Force’s attacks are framed as merely a defensive reaction, whereas any Palestinian violence is treated as a random act of terrorism, seemingly unprompted by anything at all. Also, the Israel Defence Ministry often goes to bizarre lengths to label anyone critiquing its ill-conceived idea of a peace process, which entails neither peace nor process, as anti-Semitic.

We need to justify this cruel, callous and cold war somehow. Of course, you are not an anti-Semite and, as far as you are concerned, there is no reason why you should side with a bigoted, Islamist organisation that dares to use civilians as shields, engages in extrajudicial killings of rivals and falsely claims to represent the Palestinian people. So, you may have convinced yourself to be neutral.

Oh, I can almost hear the agony. Lying helplessly under a pile of rubble is surely painful, but the true anguish comes from knowing that the international community has, once again, chosen silence over sympathy; neutrality over integrity.

It is easy for us to ignore the enormous force disparity at play here. A force disparity which means one side of the conflict is significantly more deadly than the other. If we happen to ignore the billions of dollars of military aid provided to just one side in the conflict, and turn a blind eye to the diplomatic protection that various Western countries provide to only one side of the conflict, then we are not really being neutral, are we? We are allowing others to decide a position for us.

Long before the latest round of fighting, Israel had turned Gaza into an open-air prison and crippled its economy with a blockade.

The Gaza strip is effectively closed off; Palestinians cannot leave the Gaza strip without going through at least one checkpoint, which can be closed at whim. Israeli drones, the regime’s omnipresent eye on Gaza, hover over the blue sky. Unforgiving, they see all, but are unseen, even when killing their chosen victims. This is a reminder that destruction is always an option. Life in Gaza exists in a vacuum, at the mercy of a mighty war machine.

The Israeli government of course claims that the current Blockade of the Gaza Strip is supposed to prevent Hamas from attacking Israel. It is difficult to believe that all the 2.2 million ordinary citizens of Gaza are part of Hamas. What Israel is doing is essentially collectively punishing and torturing the Gaza population. With each passing year, it is becoming more and more difficult to show the slightest amount of sympathy to Israel and its pathetic claims of being a victim.

We need to make war a criminal offense

UN-aligned’s manifesto is unequivocal about what it thinks of war:

Israel was already under the International Criminal Court investigation for allegedly committing war crimes against Palestinians. Last week ICC prosecutors also warned that they are keeping a close eye on the escalating Israeli-Palestinian violence. As we discussed last month, the International Criminal Court is very limited in what it can do to hold alleged war criminals accountable.

The following measures are promoted by the UN-aligned manifesto to define war for what it is: a criminal offense. You can also read UN-aligned’s recommendations towards creating a comprehensive global justice

It is not too late yet to end the occupation and save millions from war. Israel should read the warning signs very carefully. There is a very real possibility that along with those very states that it despises so much, Israel could eventually be branded a pariah and rogue state and if there is anything that we can learn from the last two weeks, it is that that day is getting closer and closer.