The Dystopian Novel: “Beyond Utopia”! 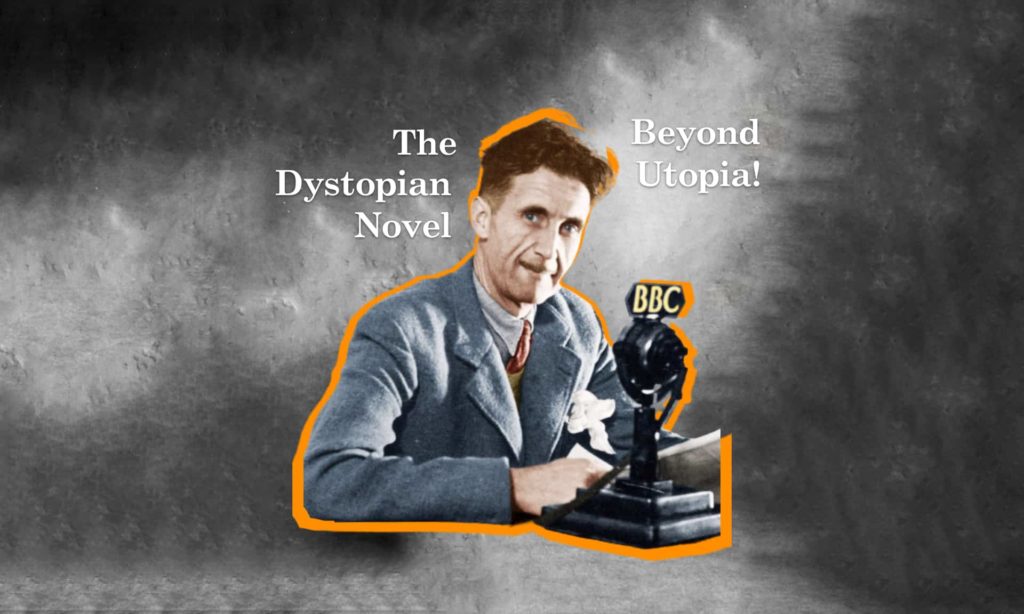 The dystopian novel developed during the 20th century when the reality of humanity’s volatile condition became evident after both the first and second world wars. The word, dystopia, refers to Utopia, the fictitious name of an ideal country, coined by Thomas More in his famous book Libellus … de optimo reipublicae statu deque nova Insula Utopia (1516).

It was designed as a political, social and religious system which was not supposed to be reflected in reality, but proposed as an ideal model.

Utopia was later seen as the panacea for the future

Many 19th-century scholars looked at a utopian future as the culmination of the forces of historical evolution. They imagined a natural development of progressive tendencies of modern times: democracy, science and socialism. Utopia would be the crowning climax of a complete and fulfilled society that would base its values on modern ideals of science and socialism. It would create morally perfect social orders.

Naturally the harsh reality was altogether different. The 20th century was, from the start, characterised by a degradation of moral and spiritual values. We have already seen the bleak picture that writers like Eliot and Scott Fitzgerald portrayed of the period; the arid waste land and the vast valley of ashes. Therefore, since Utopia was so far from the obvious reality, its counter-ego, dystopia, took shape.

Dystopia painted a most dreadful picture of a festering present and a fearful future to come. It heralded the horrors of modernity within a would-be perfect society built on tyranny, scientific oppression and dictated principles.

The two giants of the dystopian novel were Aldous Huxley, with his Brave New World written in 1932, and George Orwell with his masterpiece, Nineteen Eighty-Four, published in 1948.

The scientifically perfect society of the Brave New World portrayed the dangers of life caught between cold technology and empty values. The novel was set in A. F. 632, which corresponded to the year 2540.

In that brave new world, in fact, time was counted from when Henry Ford produced his first economic automobile model, commencing that mass production system which was to make cars a means of transportation available to everybody.

Huxley’s aim was to make people reflect on the effects that a misused concept of scientific advancement could have on mankind and society. A case in point was the way children were generated. They were no longer conceived through sexual intercourse, but generated through chemical processes similar to that of the assembly line.

The motto of that new world was ‘Community, Identity, Stability’, which was an ironic twisted version of the motto of the French Revolution, ‘Liberty, Equality, Fraternity’.

This irony was also evident in the title of the novel itself, which is actually a quotation from Shakespeare’s play The Tempest. The words, ‘brave new world’, were pronounced by Miranda when she saw some new people on the deserted island on which she and her father lived. Miranda was fascinated by the arrival of these new people and believed them to be the product of her father’s magic. Unlike Shakespeare’s Tempest, however, where the brave new world stood for a world of magic and poetry, Huxley’s brave new world had no magic, and certainly no poetry.

Like Aldous Huxley, George Orwell also warned us about the dangers of the negative development society was undertaking. However, unlike Huxley, who warned us about the technological and scientific would-be perfection, Orwell was more concerned with the political aspects.

Orwell’s Nineteen-Eighty-Four was a dark and disquieting portrayal of how society was expected to develop. It was written in 1948, but the events it described referred to 1984, 36 years after the time it was written. Orwell just switched 48 to 84.

The Earth had been divided into three main areas, and the world was ruled by three superstates: Oceania; Eurasia and Eastasia.

Oceania, which covered the Americas, Oceania and the British Isles (the main location for the novel), was referred to as ‘Airstrip One’. Eurasia covered Europe and most of Soviet Union; while Eastasia covered Japan, Korea, China and northern India. London, where the novel was set, belonged to Airstrip One, the first of these areas.

BIG BROTHER IS WATCHING YOU!

In the novel, Orwell imagined a society ruled by a single political party, which had full control of the people and their lives. It was the Party that was the be-all and end-all of society. Telescreens were installed in every household to check everybody’s behaviour, and the eyes from large ominous posters hanging on the walls outside, seemed to follow the citizens as they walked and went about their business, warning them that “BIG BROTHER IS WATCHING YOU”. A special police force, called the Thought Police, not only checked people’s social behaviour,  but also what they thought and believed in.

Apart from the dull and drab environment, the inhabitants living in that society also suffered from material poverty. The standard of housing was indecent, the quality of common goods, like food, cigarettes and liquor, was very poor.  In that manipulated society, Winston Smith, the hero of the novel, felt dissatisfied. He wanted more autonomy and the possibility of having individual freedom of choice, both denied to him by the oppression of the Party.

The Party also modified and adapted the language of the people, in order to be able to better control them.  The new language, called Newspeak, was a highly reduced and limited language. Its lexical poverty was aimed at eradicating people’s values that may have veered towards peace, freedom and love, which the party propaganda presented as false.  The Party wanted to substitute those values for their very opposites.

This was the aim of the Party, and its slogan was explicit:

The description of the ministries of Love, Truth and Plenty confirmed the Party’s aim, since they were working to achieve the exact opposite of what they stood for. The Party was able to manipulate everybody’s personality.

Our 21st century society is uncannily similar to Orwell’s dystopian world of telescreens and populist ignorance. It is no wonder that one of the longest-running and most popular reality television shows in the world was entitled “Big Brother.”  This television reality refers directly to the novel legitimising the kind of nurturing surveillance that “Big Brother” was meant to portray: “We are watching you and we will take care of you.”  Reality television is the friendly face of surveillance, but it actually highlights the worrying reality that we are all becoming pawns in a wider world order, where the game is being played by an increasingly powerful and hidden oligarchy.