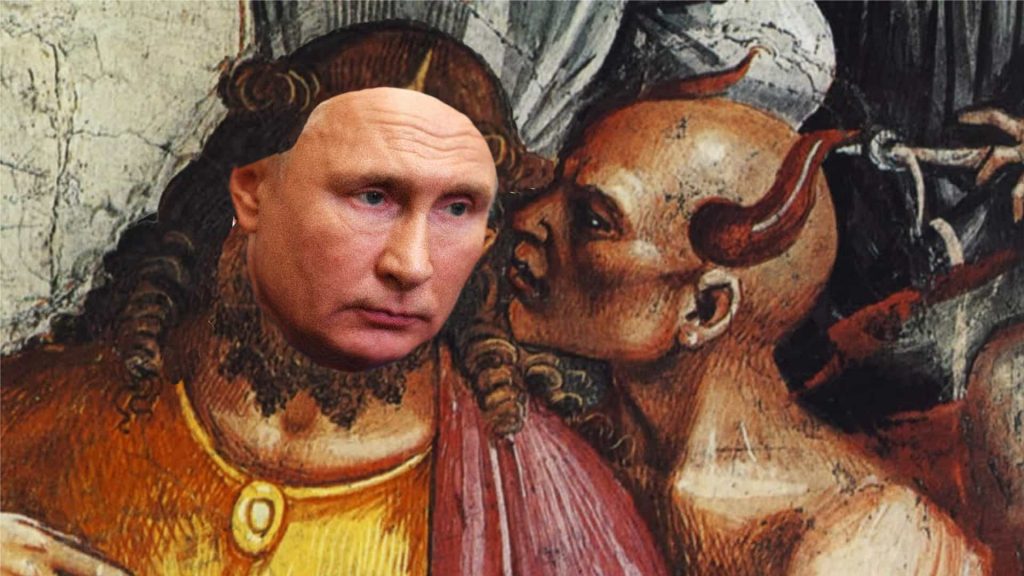 The Devil whispering in Putin’s ear. Painting: The Preaching of the Antichrist

In the August 2020 issue of The Gordian titled Russian Roulette: Why Putin’s Referendum Victory is a Threat to Humanity we published an article cheekily called Vlad the Terrible. It listed a range of crimes committed by Putin ranging from mass murder to mass deceit.

You play with fire and you risk getting burned; play with the devil and you end up screwed. Sadly, this is exactly what is happening to Europe and beyond now that the demon is waving his devil’s fork and even threatening nuclear destruction. The good news is not only that we have learned a lesson, but even more remarkably, that we are prepared to suffer the consequences of our mistakes and send this devil to hell!

Russian gas is, of course, the most obvious mistake, but all our transactions with this coldblooded murderer were wrong because at best, we were left with blood on our hands by association. This culture of normalising relations with tyrants for economic reasons must stop. So let this lesson stick and let us wean ourselves from this economic danse macabre with the oppressors of the world.

That article is more than ever relevant today, as Ukraine fights for its right to exist, so here are some of the examples of Putin’s crimes.

It should not be surprising that someone who worked as a KGB Intelligence Officer for 16 years should feel quite comfortable with committing murder. The list of Putin’s alleged victims is long and includes prominent figures such as rival Boris Nemtsov, investigative journalist Anna Politkovskaya and former spy, Alexander Litvinenko. Double-agent Sergei Skripal and his daughter Yulia were poisoned with Novichok nerve agent in England on March 4, 2018, but managed to survive the attack and are now said to be living under false identities in New Zealand. Should anyone be wondering how such a person could be tolerated in the international political community, the answer can be found in Trump’s comments, shortly after being elected, regarding Putin’s crimes: “Well, I think that our country does plenty of killing, too…”

Sometimes, Putin prefers to put critics or opponents behind bars. The list of people he has imprisoned is impressive and goes into the hundreds and some are still languishing in his gulags. It includes business people, like Mikhail Khodorkovsky, artists, such as the feminist punk group Pussy Riot and filmmaker and writer Oleg Sentsov, and of course, politicians, like his main rival, Alexei Navainy and chess grandmaster, turned politician, Garry Kasparov. Indeed, incarceration is just one of many intimidation and suppressing tactics used by the president.

Putin is not content with lording his tyranny over the largest country in the world. His greed is boundless, as his occupation of Abkhazia, South Ossetia and Crimea, as well as his relentless inroads into Eastern Ukraine, clearly demonstrate. These unlawful land grabs have cost thousands of lives and countless refugees… [Now, of course, he has gone for the whole of Ukraine!]

At the top of the list of Putin’s unholy alliances is his support for Syria’s President Bashar al-Assad. The war in Syria, which has already cost hundreds of thousands of lives and millions of refugees, owes its continuation and much of its barbarity to Putin. Nothing is sacred for Putin. Chemical weapons have been used, schools and hospitals have been bombed and efforts to provide much needed humanitarian assistance blocked…

A number of events that occurred within Russia’s direct sphere of influence also highlight Putin’s disregard for human life. A string of bombings in 1999, while Putin was Prime Minister, for instance, were used as a pretext to invade Chechnya, although there is evidence that suggests the bombings were orchestrated by the Russian security services. This was what Politkovskaya was investigating when she was murdered in October 2006. Equally shocking are the events surrounding the Kursk submarine disaster in which every one of the 118 crew members perished. The nuclear-powered Kursk sank on August 12, 2000, a few months after Putin became president.

Not only was the Russian rescue operation suspiciously slow and botched, with an emergency not having been declared until 11 hours after the accident, but Putin deliberately forbade British and Norwegian vessels, who were better placed for a rescue mission, from assisting until a good five days had passed. It was these British and Norwegian divers who eventually found the trapped and drowned bodies seven days later. Another suspicious submarine accident, which resulted in 14 fatalities, occurred on July 2, 2019 with the deep-sea submarine nicknamed Losharik.

Putin’s obsession with his macho image is more than just a matter of stunts, like the famous one involving the Siberian tiger. The way the Beslan School siege was dealt with, for instance, ended up costing the lives of 333 innocent people, of which 186 were children. The siege by Islamic militants started on September 1, 2004 and lasted three days, until the lives of the hostages took second place to the need to adopt a heavy-handed approach, which resulted in the deployment of tanks, incendiary rockets and other forms of heavy weapons.

The Moscow Dubrovka Theatre hostage crisis, two years earlier had been dealt with similar disregard for human life. On that occasion about 200 of the 850 hostages died as well as all 40 Chechen insurgents when the security forces pumped a toxic gas into the theatre. The identity of the substance was never revealed.

The way the coronavirus pandemic was dealt with betrayed the same obsession with image over safety. As Kirill Martynov, the political editor of Novaya Gazeta pointed out:

“First the state lied by hiding the true extent of what was happening from the people, from itself and from the outside world. When the extent of the falsification became obvious the state continued to tell lies…”

Back to February 2022 and we can all see what turning a blind eye to this scheming despot can lead to. So far it is the full and unprovoked invasion of a sovereign democratic State, but as the Ukrainians keep telling us: “It won’t stop with Ukraine!” We need to take heed…

Unlike most organisations, UN-aligned is, primarily, its members. We are the New United Nations and though just a drop in the ocean, for now, we will carry on growing until we will become a force to be reckoned with!The more of us there are, the more chance we have of achieving our aims. Help us by promoting membership to you friends or to people you think have similar values. If every member added another, membership would snowball and we would be unstoppable!We also need active members: people who roll up their sleeves and contribute to the work of the organisation. Some already have, for instance, by writing articles for The Gordian, or offering to help with proofreading. No matter what you can do, we want you. Write to us with your talents and we’ll make it work.
Become a free member →
Country Profile, Explainer, Human Rights