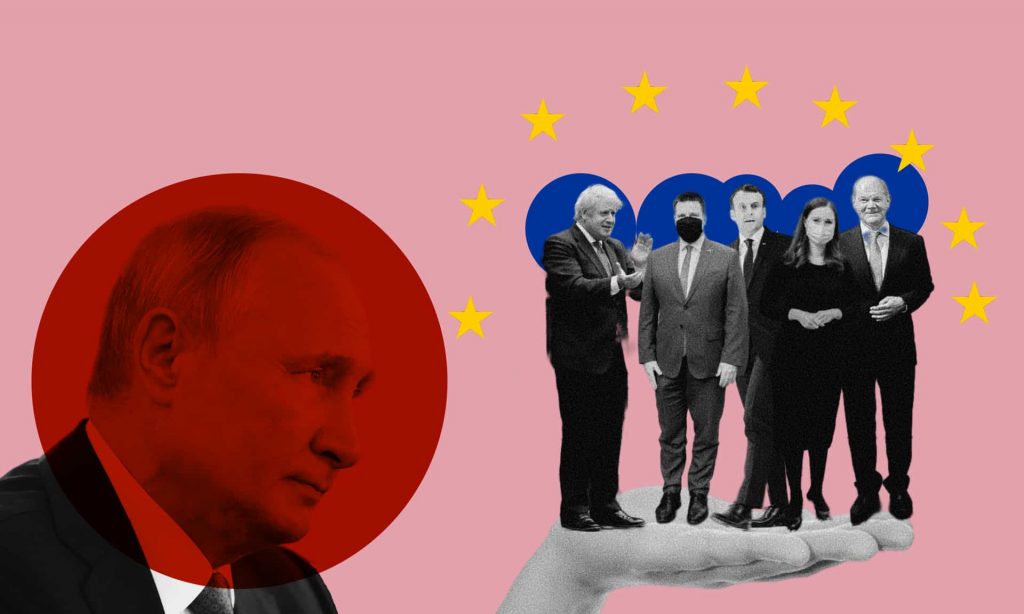 We stood by and watched Putin help deliver both Brexit and Trump. We were quite happy letting him tear Syria apart. So what, he invaded Donbas? He is a cold-blooded murderer? “What then? poor beastie, thou maun live!”

“Putinism required diplomacy”, that’s what diplomats said anyway. It was obvious to most, at the time of each of these hammer blows, that Putin’s tentacles had penetrated through and influenced our democracy. Our response to this despot for his crimes? The occasional sanctions here are there. Don’t get me wrong; although they are increasingly becoming the bulwark of our international system, sanctions can work. But they won’t if we are too paralysed by indecision, or when we are at crossroads with ultra-complex choices: utilising green energy, on the one hand, or continuing importing Russian gas during a climate emergency, on the other.

Across the European continent, the differing assessments of Helsinki, Berlin, Paris and London as to how to construct something stable out of the rubble of post-Soviet Russia, have historically always been in flux. Different European leaders have taken different views at different places at different times. Finland took a neutral position towards Russia (Finlandisation), Tories happily welcomed Russian money into Londongrad and Victor Orban became besties with the man – psychologists are right, opposites attract is an utter rubbish theory.

The threat of Putin and his permanent place in the UN Security Council has been a tricky question from the start, although, until now, all of the man’s madness manifested itself in a few vetoes and an invasion here and there. The vengeful and blood-curdling image of this Russian dictator has been too gradual, even for China and the US. Dealing with Russia’s fascism required concerted action and, crucially, the solution had to involve the acknowledgement of hypocrisy – namely that countries that have already broken international law, can successfully persuade others not to follow their path.

On the 18th of February Putin amassed 190,000 troops to the Ukrainian border after Ukraine’s renewed talks regarding its NATO membership.

I have to say, when I first read that, I was almost relieved. So apocalyptic have my recent imaginations been: 190,000 troops – bad news for the Ukrainian’s children, I thought, but okay for their children’s children, who will be living in Putin’s imperial delirium and will most certainly not be reading any history, not this version of it anyway. Maybe that is what we are collectively on the point of settling for…

Putin became more and more unstable. His composed appearance gave way to his unhealthy obsession with the reunification of the motherland. Yes, Russia had waged war before, but never on Europe, at least not since World War II. Europe went on high alert mode: France’s Macron called to check up on him, the foreign ministers of EU countries met with Russia on numerous occasions. Clearly, Putin was enjoying himself: everyone had to bring solutions to a problem of his own making. Soon it became apparent that Putin is not an interlocutor. For Putin, international law and human rights has always been an a la carte menu and he has always been one of those pitiable petty autarchs who needs to have it his way. Everyone had fallen for a big strategic deception campaign.

On the 24th of February 2022, Russia launched a full unprovoked invasion of Ukraine and everyone realised that shit had hit the fan.

At first, countries like Germany and France were at odds with the Anglosphere over how to handle Russia. There were options on the table, turns out they always were, but which ones are the best for “my country”? Once Putin invades Ukraine, he could come for Finland, which is also not a NATO member, and then it will probably want to go for Sweden, again, also not a NATO member. What stops Putin from going for Estonia, Moldova, Lithuania or Latvia next? Where would it end? You might want to ask Hitler.

Uniting all of Europe in the face of armed aggression against Ukraine did not take long and so far the response to his aggression has been unprecedented. For the first time, Germany sent arms to Ukraine breaking a longstanding practice of blocking lethal weapons from being sent to conflict zones. Poland, Hungary and Czechia, notoriously famous for being fascists when it comes to accepting migrants, welcomed Ukrainians with open arms, even going as far as abolishing all paperwork for them when crossing the border, I suppose being white helps – the continent’s double standards sometimes really gets under my skin – even Viktor Orban said that “whatever sanctions EU member states agree on, we’ll back them”. What a day to be alive!

This was a moment of truth for Europe. For years, it has watched iron-man rising worldwide and polarising the advance of authoritarianism. It has closed its border to those in need and it has refused to rap their allies’ knuckles when they have their naughty episodes. You proved it, you can take action if you want to. It is time Europe opens up and acts as a force for good, rather than to isolate itself like a group of private club members, which many claim they are, that have no interest in anything else, but their own wealth and health.

Putin has taken a very large risk that this will go wrong. At this moment of maximum danger, he must implement an immediate ceasefire, but of course, he probably won’t. The moment they take bread and circuses away he will be exposed. Already there are plenty of people in the Russian elite who are questioning his judgement and, most importantly, his mental stability. With the economic cost steadily mounting, Putin’s Russia may soon feel it needs to make its move. There is only one way out of this morass and that is for Putin to be removed from office, a move that is for Russians to will and to desire, but when that moment nears let’s make sure to give him the same treatment as any other dictator.

Unlike most organisations, UN-aligned is, primarily, its members. We are the New United Nations and though just a drop in the ocean, for now, we will carry on growing until we will become a force to be reckoned with!The more of us there are, the more chance we have of achieving our aims. Help us by promoting membership to you friends or to people you think have similar values. If every member added another, membership would snowball and we would be unstoppable!We also need active members: people who roll up their sleeves and contribute to the work of the organisation. Some already have, for instance, by writing articles for The Gordian, or offering to help with proofreading. No matter what you can do, we want you. Write to us with your talents and we’ll make it work.
Become a free member →
Country Profile, Human Rights