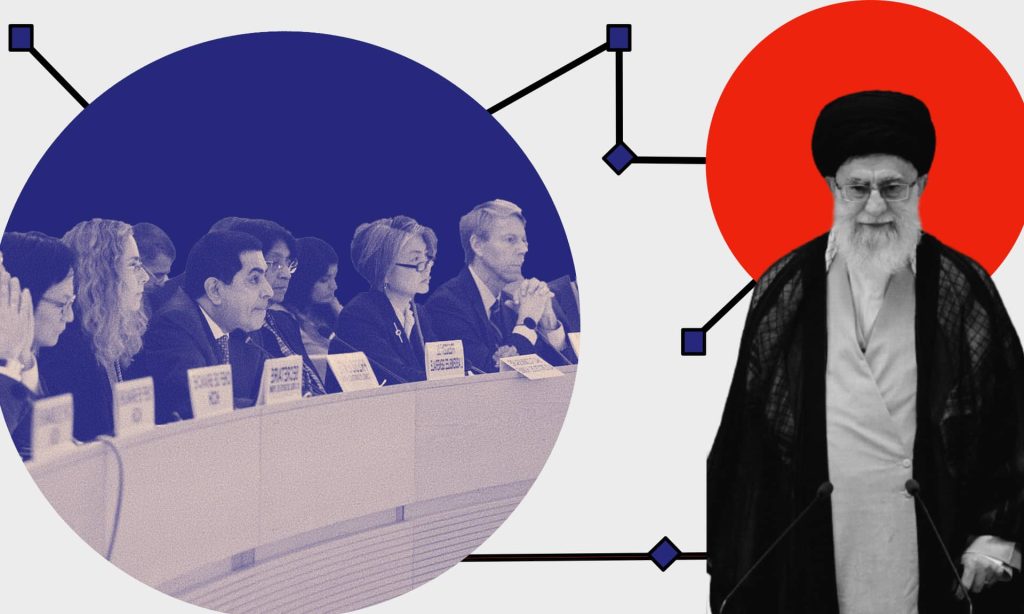 UN makes itself useful and votes on a fact-finding mission into Iran, but don’t look at it too closely. Graphic: UN-aligned Design Team.

The UN HRC approved a fact-finding investigation into human rights violations in Iran. However, the vote reveals three disturbing facts about the Council and its ability to protect human rights.

When the United Nations is not busy declaring French baguette a world cultural heritage or hosting awkward diplomatic cocktail parties where everyone pretends to like each other’s national dishes, it dedicates a small portion of its resources to protecting human rights across the world.

Earlier in November, a fact-finding investigation into human rights violations in Iran, where hundreds have died and tens of thousands have been detained since protests started in September 2022, has been approved by the UN Human Rights Council.

Investigating Tehran’s notorious record on human rights since the regime’s bloody revolution in 1979, shouldn’t be a big surprise, one would imagine, but sadly, coming from the United Nations, it is.

The special rapporteur is tasked to investigate human rights violations in Iran and report back to the UN, providing a detailed and comprehensive picture of the situation on the ground.

Seeing that sanctions imposed on the regime have had little impact so far, many are hoping that the move could lead to increased pressure on the Iranian government to improve its human rights record. Is this the UN Human Rights Council’s time to shine?

Unlikely. Here are three facts about the vote that show why, in its current state, human rights cannot and should not be left in the hands of the UN Human Rights Council and its members.

Let’s do some maths: following the vote on the 35th special session on the 27th of November, only 25 out of 47 members voted in favour of the motion. This is about 53% of the members, who agreed to set up a simple ‘fact-finding mission’.

Remember, this is a body of the UN that is entrusted to protect human rights, and almost half of its members are not even willing to investigate serious allegations of human rights abuses, including rape, torture, and discrimination against Iranian women, LGBTQ individuals, and religious minorities.

The United Nations General Assembly, that’s the one with 193 members, elects 47 countries through a majority vote to serve at the Human Rights Council. Candidates are, as one would hope, assessed based on their contribution to the promotion and protection of human rights.

However, here’s the catch: HRC memberships are distributed geographically. So African countries get 13 seats, Asia-Pacific gets 13; Latin America and Caribbean states get 8 seats; Western European and other states get 7 and; Eastern Europe gets 6 seats. Naturally, at some point, Iran itself could run for membership in the Council.

The HRC’s effectiveness is almost always limited by the lack of cooperation from governments that violate human rights. And the reason for the council’s systemic perversity is this: Somewhere along the way the UN prioritised quantity over quality and platforming bigotry over safeguarding human rights. As long as counties that do not give a toss about human rights get to occupy a seat at the HRC, the council will not be able to effectively address human rights abuses.

34% of Council members refused to do their job

Abstaining from voting during crucial decisions at the UN Human Rights Council should not be an option because it diminishes the council’s ability to effectively promote and safeguard human rights.

In diplomatic circles, however, abstaining from voting is like wearing a fake moustache: a comically bad attempt to disguise true identities and avoid upsetting their bullying and unholy friends. In the pursuit of self-interest, however, this flirtation with abstentions can only be done with a serious cost, as abstaining from a vote does not present a neutral stance, but rather a dereliction of duty.

Abstaining from voting, at best, signals a lack of dedication to the council’s mandate of protecting human rights and at worst, it betrays a supportive attitude towards elements who attempt to avoid accountability.

Ideally, the UN Human Rights Council should be the conscience of our civilised world, not a playground for bullying nation-states and for this reason member states must always play an active role in voting during important decisions at the UN Human Rights Council to support the council’s work and ensure that it can successfully carry out its mandate.

The only thing necessary for evil to triumph is…

Perhaps, instead of spending 20 million euros of UN aid money on, admittedly a beautiful painting for, the ceiling of the council, architects should have opted for printing Edmund Burke’s powerful words on the front door of the chamber: “The only thing necessary for evil to triumph is for good men to do nothing”, reminding all those who enter the chamber that we must stand up for what is right, and never be complacent or complicit in the face of injustice.

Fact-finding missions may find the truth, but what happens then?

Although UN Human Rights fact-finding missions are a crucial tool for the HRC in its mandate to promote and protect human rights around the world, these missions often encounter challenges that limit their effectiveness.

For example, In 2015, a UN HRC fact-finding mission was denied access to Syria to investigate allegations of human rights abuses and war crimes committed by the Syrian government and its allies. The mission was only able to conduct a limited investigation from neighbouring countries, and its final report was rightly criticised for being incomplete. Iran has already announced that it will not collaborate with investigators.

However, assuming the commissions and investigations successfully document what is already common knowledge about the Iranian government’s unlawful force to suppress protests, there is no implementation mechanism for the report.

In 2009, the Goldstone Report, which was the HRC’s fact-finding mission to investigate alleged human rights abuses by Israel during its military operations in Gaza in December 2008, found that Israel had targeted civilians and civilian infrastructure, and had used disproportionate force in its operations. The UN General Assembly subsequently endorsed the report and called for its implementation.

What happened? Nothing really. The Israeli government issued an initial 32-point formal response to the fact-finding mission’s report on 24 September 2009. The response listed a series of what it argued were serious flaws and biases in the report, finally concluding that the report perverts international law to serve a political agenda.

The mission’s final report was never implemented and had little impact on the situation on the ground.

Many argue that the findings of the HRC fact-finding missions can potentially be used as evidence by the International Criminal Court (ICC) in its investigations and prosecutions. That might be some good news at least. Though, is it?

While HRC fact-finding missions cannot be sent directly to the ICC, it is true that their findings can potentially be used by the ICC in its investigations and prosecutions of individuals for genocide, crimes against humanity, and war crimes. However, taking a closer look at the ICC cases leaves one with little hope.

In 2021, the ICC had 14 ongoing investigations with each case costing over €10.5 million. Six of those cases dated back over a decade. With so few success stories to speak about, it is highly unlikely that the ICC constitutes much of a deterrent for the Iranian regime.

Depressing aye? Is there anything to celebrate at all?

Yes, there are many reasons to be optimistic.

The move should mark a shift in the international community’s approach towards tackling the crisis of systematic impunity. Perhaps it could also serve as a wake-up call for Iranian authorities to end their all-out militarised attack on demonstrators, and safeguard human rights.

Recently, Iranian women have been receiving recognition from the international community, including being named heroes of 2022 by Time magazine. This vote, along with the growing support from the global community, has given Iranians renewed strength and hope.

The role of an organisation par excellence like the Human Rights Council should provide more than just a hope for those suffering from human rights violations. The HRC is a United Nations body with the mandate to promote and protect human rights around the world. As such, it has a crucial role to play in addressing human rights issues and holding governments accountable for their actions.

Join the UN-aligned’s call for the creation of a better United Nations that represents the best in humanity.