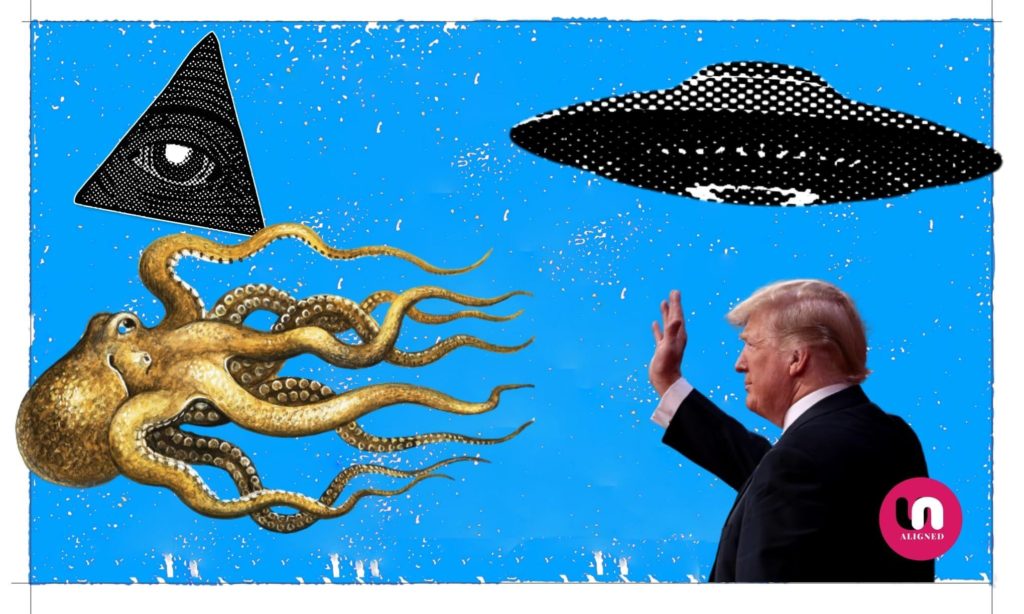 Thanks to the digital age, the Internet and social media have brought us to just a few clicks away from nonsense. Photo: UN-aligned design team.

Guarded by some 25 000 troops, Joe Biden successfully took the oath of office. Earlier Mr Ex-President had taken off for Mar-a-Lago. Hopes and dreams were shattered. I felt a rush of compassion for the QAnon believers who felt betrayed realising that nothing happened; no arrests, no intervention. It is bitter to realise that the firm ground below one’s feet has collapsed. The liberating, newly revealed truth turned out to be yet another lie. Yet, the question remains: What were they thinking?

Even though it sometimes feels as if we are living the golden age of nonsense, conspiracy theories are a part of human history. In July 64 AD, the great fire of Rome broke out destroying much of the city. The emperor Nero was blamed for plotting the fire. Allegedly Nero himself blamed the Christians. The Jews have been subjects to conspiracy theories from spreading disease in Medieval times to the defeat of Germany in WW1.

Jan-Willem Van Prooijen and Karen M Douglas have studied various aspects of conspiracy theories and suggest they occur in all eras and cultures, thriving especially in times of societal crisis. Big events must have big explanations and a virus that suspends the whole world must have a devious and sinister plot behind it.

Making sense of the world is one of our basic psychological needs. A challenging situation can evoke strong feelings of fear, uncertainty and distress that need a remedy, especially when combined with a surrounding that is ideologically different or even hostile. From this point of view, believing in conspiracy theories is essentially just a way to figure it out.

Van Prooijen and Douglas even suggest that this coping strategy may become a representation of the history in question as it is passed on to generations by people basing their stories on memory, folklore or novels. Shauna Bowes also says that conspiracy theories are like viruses that take new forms while spreading. After Biden’s inauguration, some QAnon believers persevered and new variants already started to develop.

In addition, conspiracy theories seem to be more appealing to those who feel isolated or marginalised from society, based on, for example, their ethnicity, income or religious or political views. Mistrust, feeling out of control, proneness to magical or superstitious thinking, schizotypy and paranoid thought have shown a propensity  towards conspiracy theories.

Research suggests that the need for uniqueness and holding information privy to only a limited number of people, correlates to some extent with belief in conspiracy theories. This finding complements studies that have posited a relationship between conspiracy theories and narcissism.

Interestingly, conspiracy theories appear to work best for those who consider themselves society’s alienated, although their mistrustful and antagonistic natures, combined with the negative effects these have on others, seem to work counterproductively.

While conspiracy theories might be endorsed to cope with uncertainty, powerlessness and marginalisation, they might increase those feelings even further, exacerbating the exclusion, rather than mitigating it. Research is still lacking on the consequences of believing in conspiracy theories, in other words, on the fate of those who support them.

In a Big Brains podcast Eric Oliver argues that Americans are divided into intuits and rationalists. This is a basic division that at the moment dominates the political scene in the United States. The intuits, who rely on their emotions, seek quick explanations to relieve the anxiety or fear caused by uncertainty. Moreover, our intuitions look for monsters under the bed to explain the fear.

According to Oliver, this different understanding of the world is the underlying reason for the polarization in the United States at present. A rational conservative and a rational liberal could find common ground in a conversation, with only some differences of opinion in political doctrines. A highly intuitive and a highly rational individual, on the other hand, would have a much harder time debating because of their drastically different worldviews.

Conspiracy theory beliefs have been explained by personality traits, psychological needs, belief systems, power hierarchies and evolution. Though alternative research has found little or no support for uncertainty and feelings of powerlessness, it is important to consider the role of social injustice in adoption of conspiracy theories.

This should urge politicians and governments to be more transparent in their actions, improve trust in authority and strive for equality and solving the many social issues of our time. From this perspective, conspiracy theories are beneficial, encouraging people to question and challenge existing power structures. After all, some conspiracies have been proven to be true, such as the Watergate scandal.

Trump supporters’ Capitol invasion reminded us about the harmful and concrete consequences of conspiracy theories. Thanks to the digital age, the Internet and social media have brought us to just a few clicks away from nonsense, and it is therefore crucial to acquire and maintain good critical and analytical thinking skills. At times a horn-headed shaman in the Capitol entertains more than a colorless matter-of-fact news article.

Sometimes social media can provide such florid content that one could start to feel that everything and everyone is just mad. Whether it is the world that is completely mad, or just social media, it is sometimes hard to tell. Oliver in his interesting podcast suggests that instead of pushing reasoning and condescension down each others’ throats, listening, acknowledging and speaking to the emotional side might generate a more positive response. That might be something useful to remember in our everyday social conversations.