Nothing empties the top resorts of Biarritz like a shark attack; or a G7 summit – a guide to what happened at the 2019 summit 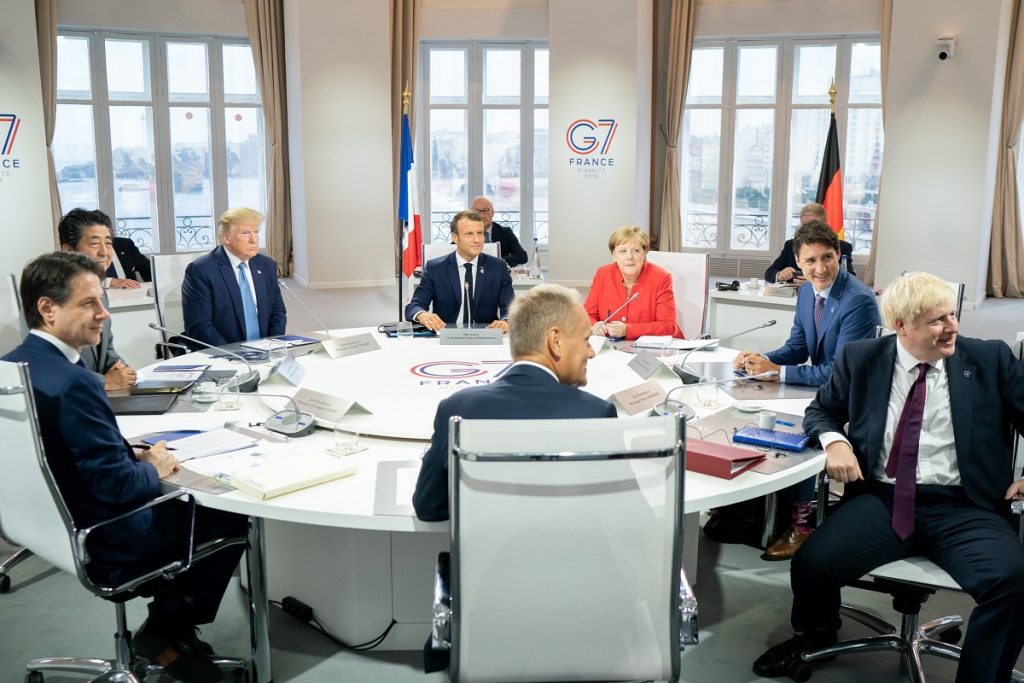 A number of thorny topics were on the agenda this year. Some of the key issues included: foreign policy, trade and, of course, climate change. Let’s start with the last one shall we?

While world leaders gather around the table to endorse a new charter on biodiversity and renew their commitments to the Paris Agreement, the climate-denier-in-chief, Trump, didn’t feel like attending these talks. He’d rather focus on trade, he says. The Metz Charter on Biodiversity attempts to boost efforts to stop biodiversity loss and sustain life on the planet. This is certainly welcomed, but we can, and should, do more in a much faster way.

Several G7 countries also announced contributions to help replenish the Green Climate Fund, reaching an overall amount of USD 5.5 billion. The G7 offered a USD 20 million package to help fight the fires in the Amazons as well. This offer, however, was quickly rejected by Brazil’s rightwing and populist leader: Jair Bolsonaro.

Surprisingly there was little, if no, progress in de-escalating current trade tensions. The US’ Trump renewed his vows to bring the Chinese economy down to its knees while Johnson, who is galloping the UK out of the EU, was desperately chasing leaders to sign post-Brexit trade deals, something that he probably should do with his neighbours,  the European Union, first. The only productive talks emerged later on when countries committed to modernise the WTO and international taxations.

Protectionism has very little space in our ever-so-entangled economy; this fact seems to be proving itself more and more as we are heading for a recession.

The bizarre appearance of Zarif, the foreign minister of the Islamic Republic of Iran,  certainly received a great amount of attention. What surprises me however, is that people actually seem to think that Rouhani has any mandate from the supreme leader to negotiate another JCPOA. Khamenei, the de facto leader of Iran, has been consistent with his anti-American and anti-western rhetoric: “Tehran will not negotiate with European countries and others over the honor of the revolution”.

Hong Kong, Ukraine and Libya were also on the agenda, but as you can imagine reaching long-lasting solutions without the cooperation of China and Russia in these fields is difficult, if not pointless.
The G7 leaders also endorsed a new framework between the G7 and Africa, underlined the significance of women’s participation in the labour market and discussed the digital transformation and how to ensure that it is open, free and secure.

The truth is that few, if any, of the free-world leaders attend these summits in order to make actual progress rather than, as John Grace puts it, “feeding their narcissistic souls”. This year’s divisions are so deep that for the first time since 1975  there was no joint communique at the end of the G7 summit. Macron probably didn’t want Trump to walk away from the last declaration as he did last time in Canada.

UN-aligned is striving for a better world. Join us now at UN-aligned

Unlike most organisations, UN-aligned is, primarily, its members. We are the New United Nations and though just a drop in the ocean, for now, we will carry on growing until we will become a force to be reckoned with!The more of us there are, the more chance we have of achieving our aims. Help us by promoting membership to you friends or to people you think have similar values. If every member added another, membership would snowball and we would be unstoppable!We also need active members: people who roll up their sleeves and contribute to the work of the organisation. Some already have, for instance, by writing articles for The Gordian, or offering to help with proofreading. No matter what you can do, we want you. Write to us with your talents and we’ll make it work.
Become a free member →
Global Issues, Country Profile