António Guterres: The Power Under The Throne 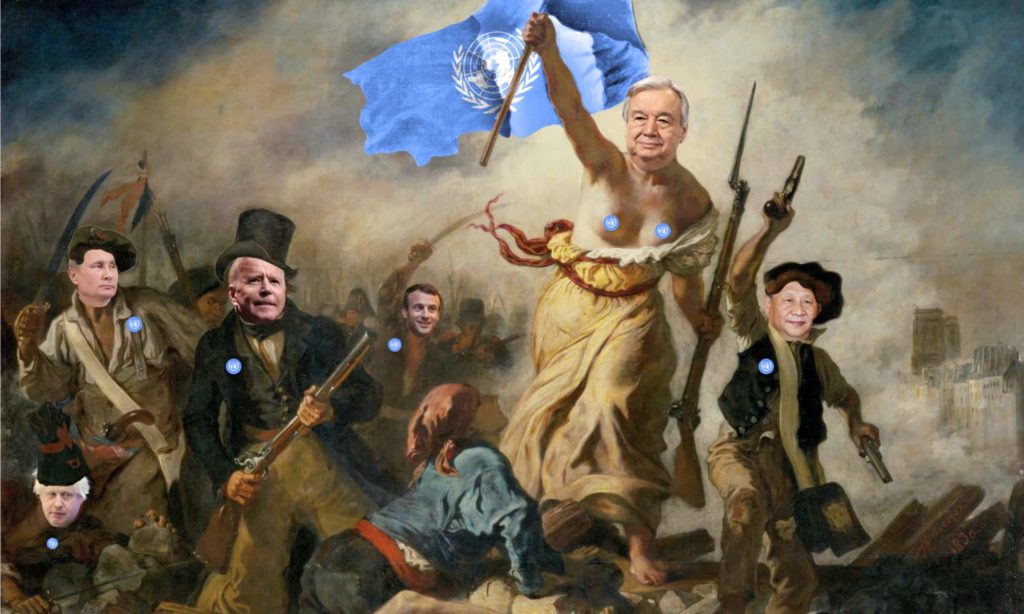 Antonio Guterres and the five permanent members of the UN Security Council. Graphic by the UN-aligned Design team.

The feeling I experience when plunging into the ocean of communiques from the United Nations is always the same: drowning in an alphabet soup. Often, the words are noble, the causes honourable. Occasionally they even make a difference. Report after report; document after document; resolution after resolution… and yet the members of this mighty club behave like undisciplined children who delight in doing just as they please. The world of politics rolls on like a combined harvester devoid of breaks, macerating anyone unfortunate enough to get in its way. They only serve to create one grim statistic after another.

The inevitable feeds of the preventable caught in the headlights of fake news, fake politics and all too real indifference. The United Nation should be above all that, but we have been content to settle for a toothless dinosaur whose greatest ambition is mere damage limitation. We deserve better. Well, we should. UN-aligneders do, because they have already made a statement: THIS IS NOT HOW I WANT TO BE REPRESENTED.

“The Secretary-General is appointed by the General Assembly ‘upon the recommendation of the Security Council’. This means that any of the five permanent members can block a nomination by voting against it, as happened to Boutros Boutros-Ghali when the USA ‘vetoed’ his reselection in 1996. Consequently, it would be highly unlikely that a genuine reformist could be appointed to the post, as the candidate would have problems securing the favour of the five gatekeepers.

To date, the General Assembly has never failed to appoint the recommended candidate, who has always been male.”

Impartiality is one of the requirements for the post and this includes complete independence from all national governments. One of the main tasks of the Secretary General is bringing “to the attention of the Security Council” any matter that “may threaten the maintenance of international peace and security.” Whilst it would be totally inaccurate to describe the role as ceremonial, in practice there is little the Secretary General can do if opposed by any one of the five permanent members of the Security Council.

António Guterres has been quite outspoken at times, but those brave words are easily undermined. His blunt condemnation of abuses in Yemen, Syria and Burma, for instance, have had little chance of producing the desired changes because of the support the perpetrators have had form the US, Russia and China respectively. As a consequence, people just keep losing their human rights, their homes and their very lives.

Sticking one’s head out and losing it

One Secretary General, Dag Hammarskjöld, did try to take matters into his own hands by rolling up his sleeves and opting for direct action. His style probably felt threatening to all five permanent Security Council members and it certainly cost him his life, most likely at the hands of the CIA (US) and MI6 (UK), possibly with Belgian involvement. His plane was shot down while he was on his way to negotiate a cease-fire between UN forces and the Katangese troops under Moise Tshombe who were fighting for independence from the rest of the Congo, spurred on by Belgian mining interests. Despite evidence to the contrary, the US blamed the assassination on the USSR.

Whoever was responsible for his death, the message was unequivocal: stay put and don’t step on anyone’s toes. Hammarskjöld was only the second Secretary-General to hold the post. A warning shot may have triggered a defensive response that could have had profound implications for the future trajectory of the UN, so it seems as though to avoid any ambiguity the order was simple: ‘shoot to kill’. The ploy had the desired effect and successive UN Secretary Generals were careful not to rock the boat even when faced with atrocities of genocidal proportions.

Making the best of a bad job

As for Guterres, he does what he can. His first appointment as Secretary General in 2017 followed a glittering career which included being the socialist Prime Minister of Portugal from 1995 to 2002, serving as President of the Socialist International from 1999 to 2005 and his appointment as UN High Commissioner for Refugees from 2005 to 20015. Sadly, his track record on human rights has not always been exemplary. In 1995, for instance, referring to the WHO’s removal of homosexuality from the list of mental illnesses in 1990, Guterres claimed that he “did not like homosexuality” and that it was something that “bothered” him.

Nevertheless, his government introduced some bold reforms, such as the decriminalising of drug use and the legalisation of same-sex civil unions. During his first term as Secretary-General, he spoke out in support of various oppressed civilians, including those in Syria, Myanmar and Yemen, though he has been accused of not always going far enough, as in the case of the abuses against the Uyghurs.

In June, following the Security Council’s endorsement, Guterres, who was the only candidate, was voted in for the January 2022 – December 2026 term by the General Assembly. On June 18th he tweeted:

Ultimately, apart from an investigation here and several “deeply concerned” type comments there, Guterres’s first tenure had little of note and it is unlikely that he will surprise us in his second. This is not, however, due to his lack of goodwill and integrity as it would be very difficult to achieve much more under the current circumstances.

Former President Trump showed us just how easy it was to withdraw funding from the UN, proving that it is no longer necessary to assassinate an individual when the whole organisation can so readily be brought to its knees.

As the saying goes: He who pays the piper calls the tune.