From patriotism to pure poetry: Isaac Rosenberg’s Break of Day in the Trenches 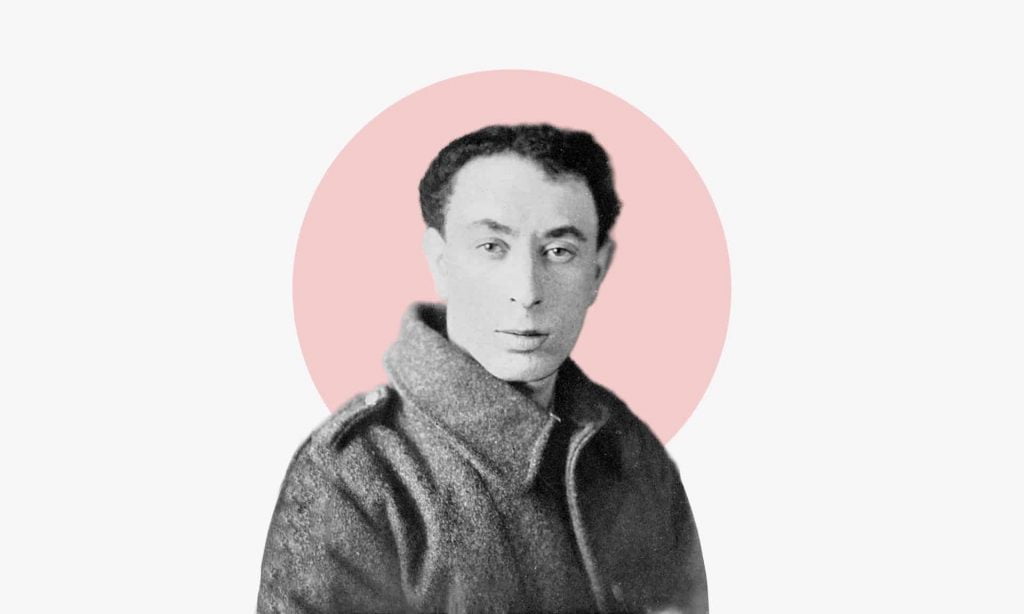 The darkness crumbles away
It is the same old druid Time as ever,
Only a live thing leaps my hand,
A queer sardonic rat,
As I pull the parapet’s poppy
To stick behind my ear.
Droll rat, they would shoot you if they knew
Your cosmopolitan sympathies,
Now you have touched this English hand
You will do the same to a German
Soon, no doubt, if it be your pleasure
To cross the sleeping green between.
It seems you inwardly grin as you pass
Strong eyes, fine limbs, haughty athletes,
Less chanced than you for life,
Bonds to the whims of murder,
Sprawled in the bowels of the earth,
The torn fields of France.
What do you see in our eyes
At the shrieking iron and flame
Hurled through still heavens?
What quaver – what heart aghast?
Poppies whose roots are in men’s veins
Drop, and are ever dropping;
But mine in my ear is safe,
Just a little white with the dust.

Isaac Rosenberg (1890-1918) did not sing the praises of war; he reflected on its philosophical and poetical impact through symbolism and imagery.

Break of Day in the Trenches is a short poem that not only deals with the deadly devastation of trench warfare, but also with the poetic and philosophical view of human emotions.

The opening line of the poem poetically and metaphorically describes the break of day by saying, “The darkness crumbles away”. It is not the birth of light, but the crumbling of darkness. Everything is withering, everything dies, even darkness. The poet then introduces the central figure of the poem, an ungainly rat. This lowly creature is a symbol around which the poem revolves, and is the starting point for the poet’s reflections on the atrocity and stupidity of the war.

The rat is described as being cosmopolitan. It is, in fact, a rat and therefore has no nationality, no patriotic sentiments. It crosses both sides of the trenches and scurries over German soldiers and British soldiers. It takes no sides, and in this wretched scene of death and destruction it seems to be superior to the dying soldiers.

This insignificant creature is sardonic and grins at the paradox of being more likely to live than the unfortunate soldiers, who are indeed “haughty athletes” with “strong eyes” and “fine limbs”. Although they are strong and athletic, they are in fact, shooting at each other…

The poem ends with another touching symbol, the poppy. It is a sad reflection of a life prematurely ended by war.

The poppy is today the symbol of the fallen soldiers in that cruel First World War in which the average age of the dead soldiers was only 19. Among the hundreds of thousands killed in the trenches were 250,000 boys and young men. Isaac Rosenberg was killed there in 1918, he was only 28.