India on the Brink 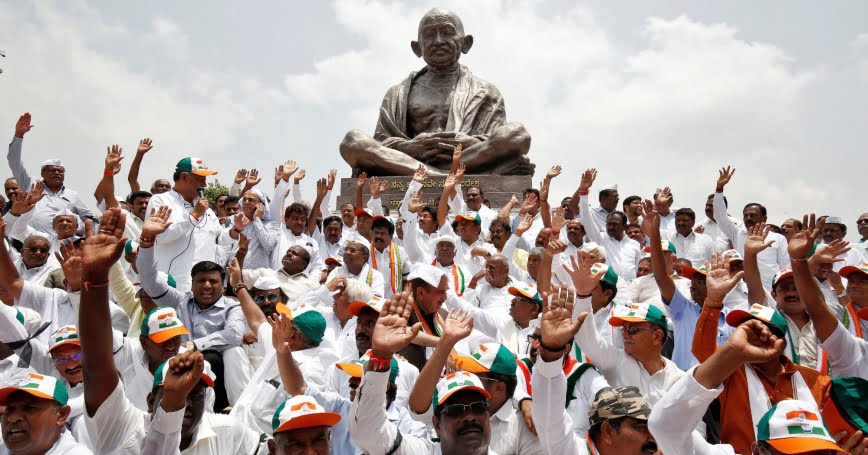 India on the brink

When Martin Luther King Jr. visited India in 1959, he paid the homage to the venerable land with these powerful words:

“To other countries I may go as a tourist, but to India I come as a pilgrim.”

Would Mr. King think differently of India if he were alive today? Probably not. The narrowminded fanaticism that is trying to drag India down is not a new phenomenon. Even if one cannot ignore it, one can always look beyond it. However, the world is not what it was 60 years ago. It is a much more dangerous place. Our efficiency in depleting the earth’s life and resources is only matched by the relentlessness of nature’s means of revenge, such as climate change or the smog that has recently been chocking Delhi.  Moreover, if we should end up fighting for whatever is left, we would be able to do so with much more devastating results. Finally, mass media have altered the way in which we communicate. Just as the Internet, for instance, helps the wise become wiser, it often has the opposite effect with fools, who become easy prey to those who would exploit them.

Nationalism is on the rise and if governments accept it, or worse, pander to it, the results will be catastrophic. The lynch mob mentality is no longer dependent on a few rabble-rousing voices. The mob can easily become a nation. The government of Narendra Modi, like so many others around the world, seems happy to rise on the tide of nationalism, rather than to challenge it with the promotion of harmony and respect. This is a dangerous game, with short-term gains for those in power and dismal consequences for generations to come.

On the 25th November, the Dalai Lama, whose official residence is in India, Tweeted:

“There is an urgent need for India’s traditions of non-violence and compassion in today’s world, which is still riven by fighting and killing, sometimes even in the name of religion.”

Ironically, Indian nationalists, fighting for Mother India’s traditions, are doing so at the cost of its most precious ones of “non-violence and compassion”. The last few weeks have continued to highlight the increasing tensions within the world’s largest democracy; tensions often springing for emboldened nationalism and bigotry. Here are a few examples…

A State, a Professor and a Temple

On the 31st October, the predominantly Muslim State of Jammu and Kashmir was officially demoted to a Union Territory. This involved the removal of many of its privileges.

On the 7th November, Feroz Khan, a newly appointed Sanskrit professor at the Banaras Hindu University in Varanasi, was targeted by right wing protesters and had to go into hiding. The student protestors objected to a Muslim being allowed to teach Sanskrit, the ancient language of India.

Then, on the 9th November, the High Court of India ruled that the site of a mosque, completed in 1529 and destroyed by Hindu nationalists in 1992, should be used for the construction of a Hindu temple.

The second example is the most sinister because it represents unmitigated prejudice and bigotry. The assumption of these narrowminded students is that only Hindus are legitimate Indian citizens. It is even more disgusting because those responsible were young university students who should know better. The university board, in fact, unequivocally condemned their actions and stuck to its decision. The other two examples are more complex because they are muddied by religious rivalry, which is never clear-cut.

The Demotion of a State

The situation in Kashmir has its roots in the 1947 partition of India. At that time, the maharaja of the Princely State of Jammu and Kashmir was Hari Singh, a Hindu, while the majority of the population was Muslim. Maharaja Singh was therefore reluctant to join either Pakistan or India. As he dithered, however, Pakistan attacked and the Maharaja had no choice but to ask India for help. Prime Minister Jawaharlal Nehru did so on the condition that the state should merge with India. The ensuing war, however, left about a third of the state in Pakistani hands. Nehru, therefore, planned for a full-scale war against Pakistan, but was held back by Lord Mountbatten who convinced him to appeal to the UN instead, since the invasion by Pakistan was a clear-cut case of aggression. Nevertheless, the UN did little more than discourage further confrontation, with the result that the situation in Kashmir remains volatile to this day.

Still, the Indian part had been given special privileges, such as a constitution and local laws, which included a discriminatory ban on citizens from other Indian states form purchasing land there. All these privileges were rescinded on August 5, 2019 when Article 370 was abolished and the state was fully placed under the control of central government, with its subsequent demotion to a Union Territory at the end of October. These arbitrary moves resulted in riots, thousands of arrests and the further instability.

India is a multicultural nation with more than 20% of its billion-plus population not classified as Hindu. Modi’s decision will embolden his nationalist supporters, but of course, it will do little to promote harmony amongst his people or win the trust of Kashmiris.

“In the Name of Religion”

The temple ruling is not as outrageous as it seems, since the location in question is indeed one of the holiest sites of Hinduism, in as much it is claimed to be the birthplace of the divine Rama. Muslim invaders had destroyed the original temple and replaced it with the mosque, and though it had been standing for almost 500 years, its presence has always been considered an affront to devout Hindus. Though the disputed area of 2.77 acres was set aside for the construction of a Hindu temple, 5 acres were given to the plaintiffs for the construction of a mosque. Not quite going the extra mile, but an attempt at compensation, at least. Still, considering the sensitivities, a poor and unimaginative attempt, and far from the spirit of compassion the Dalai Lama referred to.

The “one of us” Mentality

India’s main problem is this tacit belief, held by many of its citizens, that Hindus are somehow more Indian than the rest. This privileged status is endemic and even in recent times it is not exclusive to Modi’s administration. In November 2012, for instance, a 21-year-old named Shaheen Dhanda was arrested for mildly criticising the virtual shut-down of Mumbai for the funeral of the ultra-nationalist Bal Thackeray. Her “crime” was to write on her Facebook page that:

“People like Thackeray are born and die daily and one should not observe a ‘bandh’ [shutdown] for that.”

Her 20-year-old friend, Renu Srinivasan was also arrested for liking the comment.

“In the years since Narendra Modi was elected in 2014, ugly mob hate has spilled onto the streets, trains and people’s homes. Fevered throngs surround, brutally assault and sometimes kill unarmed men, mostly Muslim. The crowds allege that the men had slaughtered cows, or were thieves; but sometimes their only crime — as when a child was stabbed to death on a crowded train near Delhi — is that they are visibly Muslim.”

Yes, India is a great nation, but it can only sit on its laurels for so long. Unless it returns to those principles of “non-violence and compassion” its magnificence may only endure in the annals of its history.

Unlike most organisations, UN-aligned is, primarily, its members. We are the New United Nations and though just a drop in the ocean, for now, we will carry on growing until we will become a force to be reckoned with!The more of us there are, the more chance we have of achieving our aims. Help us by promoting membership to you friends or to people you think have similar values. If every member added another, membership would snowball and we would be unstoppable!We also need active members: people who roll up their sleeves and contribute to the work of the organisation. Some already have, for instance, by writing articles for The Gordian, or offering to help with proofreading. No matter what you can do, we want you. Write to us with your talents and we’ll make it work.
Become a free member →
Country Profile, Global Issues, Human Rights