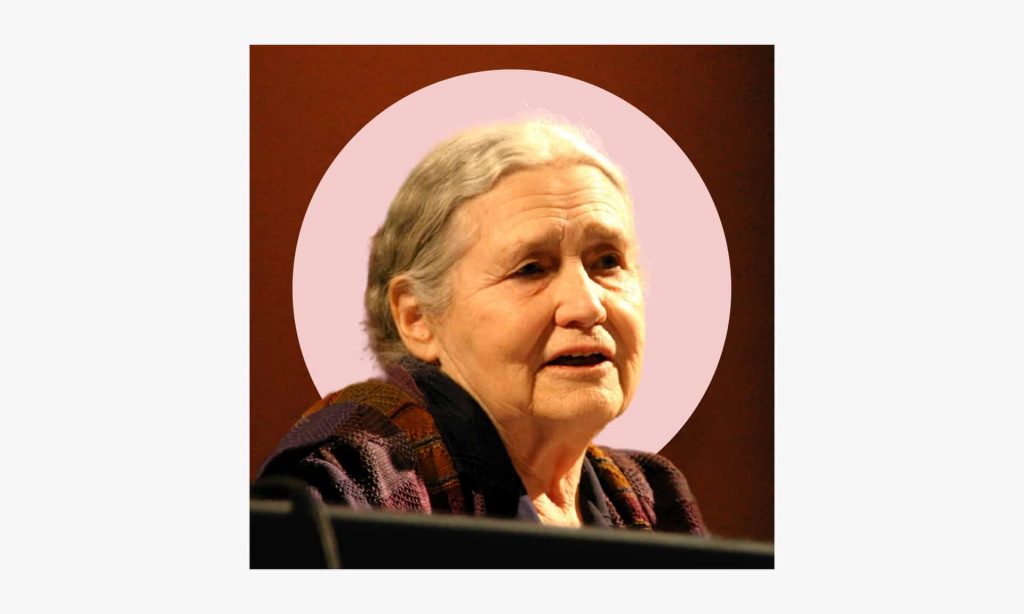 Lessing at the 2006 literary festival in Cologne. © Elke Wetzig

Doris Lessing, a female writer who weighed in on the feminist front and who wrote about persecution, intolerance and injustice.

Doris Lessing was born in Iran on the 22nd of October 1919 to Alfred Cook Taylor and Emily Maud McVeigh. Her parents were both very involved in the Second World War. Her father was an active fighter and her mother was a nurse. It was in this capacity that Emily Maud met Alfred, who had been seriously injured in battle. His leg was, in fact, eventually amputated.

Doris Lessing spent the first six years of her life in Tehran, where her father worked at the Imperial Bank of Persia. After a brief return to England the family moved to Zimbabwe, which was then known as Rhodesia. There, Alfred invested all his capital on a 3000 acre farm which he hoped to develop. Life in southern Africa was to leave an indelible influence on Doris Lessing’s existence and on her written work.

The distinct differences between Lessing’s parents were also a significant influence on her as a writer. Her father was a visionary dreamer who strove for freedom from social commitments and community rigidity, while her mother was more pragmatic and down to earth. Much of Lessing’s work describes these psychological differences between the visionary and the practical, the dreamer and the realist.

Although Doris Lessing was sent to a very good public school, she was not a brilliant student and by the age of fourteen she decided to leave school to attend secretarial college, where she learnt typing and shorthand. Lessing was very successful in the working world and after fruitful experiences with various companies she was employed by the Rhodesian Parliament.

Lessing married twice and both marriages ended in failure. Her first husband, Frank Wisdom, was a civil servant. The couple had two children before their divorce in 1943. Her second husband was a German Jew who had escaped from persecution to Rhodesia. With this man, called Gottfried Lessing, she had one child. Their marriage ended in 1949. Disillusioned by these events she decided to leave Rhodesia in 1949 and go to London where she settled. The following year she published her first book entitled The Grass is Singing, which she had written in Rhodesia. From then on Lessing dedicated her life to writing, and to an incessant search for intellectual and political fulfilment.

A few years before her death in 2013, Lessing was awarded the 2007 Nobel Prize for Literature. In awarding the prize, the Swedish Academy described her as “that epicist of the female experience, who with scepticism, fire and visionary power has subjected a divided civilisation to scrutiny”.

Doris Lessing’s first novel, The Grass is Singing, was published in London in 1950. The book, which had been written in Rhodesia in 1948, was very well reviewed by the literary critics in England, a fact that spurred Lessing to continue her career as a writer. The novel deals with colonial life and the situation of the black Africans, whom Lessing identifies as the real exiles. The fate of the black Africans and of the less privileged, like the Jews, Indians and non-whites in general, was very dear to Lessing. Even her following book, Martha Quest, published in 1952, focuses on the inequity of a society that favours one race rather than another. She felt that the colonial settlers were completely unaware of the real situation of those who were not like themselves. She even focused on the basic class differences that the settlers imported from their so-called civilised country of origin.

Class distinction together with racism formed an intense fertile ground for prejudice and intolerance. Martha Quest was the first novel of a five-novel sequence called Children of Violence. The other four novels were entitled A Proper Marriage (1954), A Ripple from the Storm (1958), Landlocked (1965), and The Four-Gated City (1969).

In 1962 Lessing published a novel that put her in the limelight of the Women’s Liberation Movement. The book, entitled The Golden Notebook, focuses on a woman’s quest for self-determination and fulfilment, with particular attention to her relationship with her partner and with society in general.

In 1971 Lessing published Briefing for a Descent into Hell , which was an interesting experiment in, as she put it, “Inner-Space Fiction”. The novel opens with a situation that sees a patient at the Central Intake Hospital who is trying to be identified. Nobody knows who the individual is, nor where he comes from. As Roberta Rubenstein points out in her critical study, The Novelistic Vision of Doris Lessing, the author represents “Everyman, rediscovering (remembering) through the exploration of the microcosm of his own consciousness the experience of the human race”.

The 1980s saw the publication of the series Canopus in Argos: Archives. This work includes: Shikasta; Marriages Between Zones Three, Four, and Five; The Sirian Experiments; and The Making of the Representative for Planet 8. Doris Lessing wrote “I would like it if reviewers and readers could see this series, Canopus in Argos: Archives, as a framework that enables me to tell (I hope) a beguiling tale of two; to put questions, both to myself and to others; to explore ideas and sociological possibilities.”

Other novels written in the 1980s which are worthy of mention are The Sentimental Agents, and The Diary of Jane Somers: The Diary of a Good Neighbour (1983) and If the Old Could (1984). Through these novels, Lessing studies individuality once again. As early as 1957 Lessing had written: “One sees man as the isolated individual unable to communicate, helpless and solitary”. In 1985 Lessing published The Good Terrorist and in 1988, The Fifth Child. Although her most recent novels are full of intense and profound studies that explore the intimacy of relationships and inner turmoil, her best novels are her first, in particular The Grass is Singing and the Children of Violence series.

Doris Lessing is also well known for her excellent essays. Her best can be found in the collections A Small Personal Voice (1975) and Prisons We Choose to Live Inside (1987).

Doris Lessing has been enthusiastically studied since the 1960s when she gained a high reputation especially for her political preoccupations and her involvement in the Feminist Movement. She had become interested in politics when she was still in her teens, favouring Marxist theories and actually joining a Marxist group. When she lived in London, Lessing was actively campaigning against nuclear weapons and joined the Campaign for Nuclear Disarmament. She also wrote for the Communist magazine the New Reasoner and visited the Soviet Union.

Her earlier novels reflect her political commitment in that they focused on the unfairness of society, especially regarding class difference and racism. The situation in Rhodesia in the 1950s and 1960s was a practical example of how racial superiority and class distinction joined forces to create an unjust and prejudiced society. Lessing best portrays this situation in her Martha Quest novels, in which she speculates on a utopian world of equality and integration where one can see “the blue-eyed, fair-skinned children of the North playing hand in hand with the bronze-skinned, dark-eyed children of the South”.

Lessing’s political commitment gradually waned as the Soviet Union grew with threatening colonial dreams of grandeur. Lessing resigned from the Communist party after the Russian invasion of Hungary in 1956.

From this point on, Lessing shifted her attention from society to the individual, in particular to the situation of women and their relationship with men. She was not really interested in stereotype feminism. Hers was a far deeper study into the inner turmoil of women and their aspirations of fulfilment and self-awareness.

Although her earlier works are certainly the most important, her later works touch such topics as sufism (a muslim mystical cult), science fiction and insanity. These subjects are all treated with great skill and dexterity. Lessing’s greatness lies in her ability to respond to the restlessness of her times and to the tensions between the visionary and the ordinary; the world of dreams and the world of practical reality.